"When I was a player, if I was crap, people were allowed tell me I was crap."

Emotions were clearly riding high after Shelbourne lost 2-1 on the road to Dundalk, for the club's second defeat in five days. Damien Duff was still processing the result, and his sending off.

The former Chelsea and Ireland winger is at the helm of Shels for the current SSE Airtricity League season, and there have been plenty of ups and downs. At present, the downs are shading the ups. 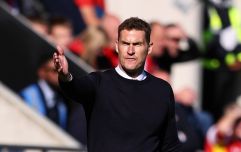 END_OF_DOCUMENT_TOKEN_TO_BE_REPLACED

Shelbourne were level at 0-0 with Dundalk when Shane Griffin was sent off, just before half-time. It was Griffin's second yellow card, and that was not the end of it. Duff was so vociferously irate that he was also shown a red card.

It looked as though Shelbourne would leave Oriel Park with a hard-earned point, but John Martin grabbed a Dundalk winner with five minutes to go. The result still raw and smarting, Duff found it hard to contain his feelings on some of the refereeing in the league. He declared:

"Whereas, if you are a referee in this country, you're not allowed say anything [about them]. If I did want to say... IF I thought they were abysmal or really poor, IF I thought that, I couldn't say it. Listen, the crowd and fans were here. They've seen it. I'm not going to comment on the ref's performance."

I wish the standard of LOI officiating wasn’t a weekly talking point.

Reaction from Damien Duff, Jack Moylan and analysis with @gavwcb and @ste_doody on the Shels patreon now

Shelbourne's third defeat in four league games has seen them drop to eighth in the table. They are away to Finn Harps, next Friday, and Damien Duff wants all involved with the club to stick together.

"You can see how much this means to me... I ain't doing this for a jolly-up, this year

"This club means the world to me. It’s the only club I’m ever going to manage in the League of Ireland, probably because I’ll be wrecked at the end of it. This is my club and it’ll forever be my club."

“This club means the world to me. It’s the only club I’m ever going to manage in the League of Ireland, probably because I’ll be wrecked at the end of it. This is my club and it’ll forever be my club” - Damien Duff #FTA pic.twitter.com/CLn4aEdyyu

Shelbourne have been a tough side to put away on their travels, this season, but their home form has been poor. After the Finn Harps game, they have a chance to put that right when they host Sligo Rovers and Drogheda in the space of a week.