The most charitable athlete in the world is Cristiano Ronaldo.

The Real Madrid star topped the "Top 20 Athletes Gone Good" list from DoSomething.org which ranks the top most charitable athletes on the planet.

Ronaldo got the nod for an impressive list of generous gestures which includes donating $83,000 to pay for a child's brain surgery and used $165,000 to fund a Portuguese cancer center. The football superstar also uses his fame as a global spokesperson for a variety of issues including childhood hunger, obesity and biodiversity.

Ronaldo beat WWE star John Cena and Wimbledon champion Serena Williams who came in second and third, respectively. Cena is heavily involved in the Make-A-Wish foundation while Williams has her own foundation and is a UNICEF Goodwill Ambassador.

UFC champion Ronda Rousey came in 14th for the good work she does for mental health awareness. 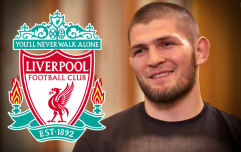 END_OF_DOCUMENT_TOKEN_TO_BE_REPLACED

Hat-tip to Look to the Stars