Chelsea knock back Barcelona and Atletico advances for Willian

Chelsea have spurned the advances of both Atletico Madrid and Barcelona after both clubs reportedly had bids turned down for Willian.

The serial Champions League contenders apparently had respective £35 million bids turned down by Chelsea with the Londoners seemingly keen to hold on to the winger in the wake of Eden Hazard's defection to Real Madrid.

The Belgian's departure leaves just three wingers in the first-team squad from last season - Pedro, Willian & Callum Hudson-Odoi - with the latter rupturing his achilles tendon in April - but the blow will be somewhat softened by the arrival of Christian Pulisic from Borussia Dortmund.

Barcelona and Atletico Madrid willing to pay £35m for Willian. Chelsea not interested

Chelsea's shortage on the flanks will not be helped by the fact that the club are struggling to get their two-window transfer ban overturned. 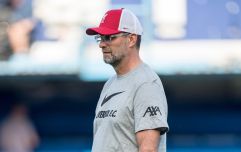 END_OF_DOCUMENT_TOKEN_TO_BE_REPLACED

Chelsea were handed the ban by FIFA for breaches concerning the transfer of players who are under 18 and the club have lodged an appeal with the CAS to overturn the decision after their initial appeal was rejected by the FIFA Appeal Committee.

The club could have been handed a lifeline if the ban had been temporarily suspended until the outcome of the final appeal is reached, ala Barcelona in 2014, where the club were able to sign Luis Suarez after their own ban had been suspended, however, FIFA rejected their request to delay the sanction and therefore they will have to wait for a ruling on their CAS appeal before they can make any future signings.


popular
The SportsJOE 12 o'clock quiz | Day 191
QUIZ: Guess the Premier League footballer from their Wikipedia page
QUIZ: Can you name every top European football club that begins with 'L'?
Manchester United launch sensational bid to sign N'Golo Kante
The SportsJOE 12 o'clock quiz | Day 190
"I remember looking at the players, in the warm-up, and Keats was just bawling crying"
Dana White claims Conor McGregor broke 'man code' by sharing DMs
You may also like
11 months ago
"He generally gives it away, his final pass has been so disappointing"
1 year ago
Jose Mourinho wells up when talking about missing football
1 year ago
Premier League wrap: Are United back and can Chelsea turn it around?
1 year ago
Manchester United blow Chelsea out of the water as both search for new identity
1 year ago
Mourinho: City's B team are better than United, Chelsea and Arsenal
1 year ago
David Luiz looking for late move to Premier League rivals
Next Page