The West London club will break the world record transfer for a goalkeeper, paying an extraordinary £71 million.

I was very wary of this earlier because of the money involved but Chelsea have agreed to pay a world record £71m to sign goalkeeper Kepa Arrizabalaga. Full story on @TeleFootball #cfc

Chelsea’s current first choice goalie Thibaut Courtois is currently trying to force a move to Real Madrid, having been failing to show up for training, and eventually being spotted in a Spanish supermarket. 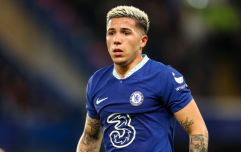 END_OF_DOCUMENT_TOKEN_TO_BE_REPLACED

That means the race is on for them to find a replacement before the transfer window shuts on Thursday, and they appear to have met Kepa’s buyout clause.

Spanish sources say the 23-year-old is due to arrive in London on Wednesday morning.

If Courtois does go to Real, the deal could be somewhat sweetened by Mateo Kovačić heading the other way on loan.

Of course, the current most expensive transfer fee for a gaolkeeper is the €75m (£66.8m) that Liverpool paid Roma for Alisson earlier this summer.


popular
Ireland team vs. France: Form players rewarded and a welcome return
Man United could be blocked from playing in the Champions League next season
French media's opinion of this Ireland team becomes clear as vital clash nears
Clive Woodward happy to 'eat humble pie' after bold comments about Ireland
"I should have been more mature" - O'Sullivan's injury trail a cautionary tale for Sigerson casualties
Eight players to watch in tonight's Sigerson Cup semi-finals
Lionel Messi makes decision on Barcelona return
You may also like
5 days ago
The three signings expected to be included in Chelsea Champions League squad
1 week ago
Chelsea fire back and clear up why Hakim Ziyech's PSG move collapsed
1 week ago
Chelsea can only include three of their new signings in Champions League squad
1 week ago
The barely believable transfer history quiz of Chelsea football club
1 week ago
Chelsea failed with deadline day bid to sign World Cup star
1 week ago
Enzo Fernandez could wear two jersey numbers for Chelsea this season
Next Page