"Most people were respectful. Some were not."

Sky Sports commentator Ian Crocker was forced to apologise to viewers after a Celtic chant was picked up by their microphones ahead of their away game with St Mirren.

Rather than having a minute's silence in memory of the late Queen Elizabeth II, match officials opted for a minute's applause.

The travelling Celtic fans countered that move with a chant that Sky mics picked up - 'If you hate the Royal Family, clap your hands'.

Once that applause came to a halt, St Mirren supporters booed the Celtic fans, while Crocker offered 'apologies if you were offended'.

Celtic fans were criticised, on Wednesday, for what some claimed was them making light of the the death of Queen Elizabeth II with banners displayed at their Champions League game against Shakhtar Donetsk. 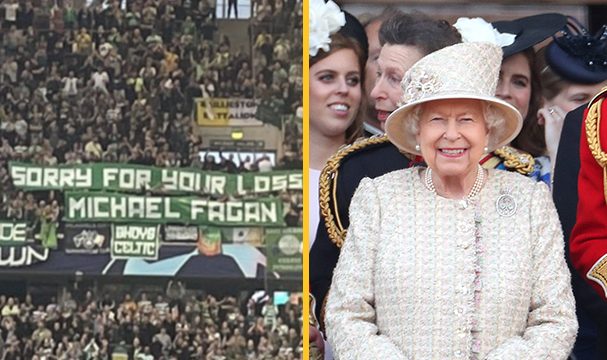 'We will abide by the protocols' - Ange Postecoglou

Celtic boss Ange Postecoglou had previously spoken about supporters of the club being respectful with regards to the passing of Queen Elizabeth II and, before the St Mirren encounter, he commented on it again:

"I have the same message to our fans that we always have. As I said before the game, we will abide by the protocols. We wore black armbands on Wednesday night.

"I think there's a minute's applause, we will abide by whatever obligations and responsibilities we have as a football club. We will do that in a respectful manner. We want our supporters to do the same."

UEFA have since opened disciplinary proceeding against Celtic for the banners, though have decided not to do so with Rangers over their decision to play the national anthem.