Argentine World Cup winner Diego Maradona has said that going to watch Argentina's round of 16 World Cup loss to France on Saturday was like going to see 'the chronicle of an announced death'.

2014 World Cup finalists Argentina crashed out of this year's finals after suffering a 4-3 defeat to France in Kazan. Argentina took an early lead in the second-half after Gabriel Mercado and Angel Di Maria scored to cancel out Antoine Griezmann's first-half penalty but it was not enough as Benjamin Pavard and a brace from Kylian Mbappe sealed a decisive win for France.

Argentina have not won the World Cup since Maradona guided the national team to a final win in Mexico in 1986 and the FIFA Player of the Century winner lamented that Argentina are just another team without five-time Ballon d'Or winner Lionel Messi.

“We came to the cinema more than the pitch, because we came to see the chronicle of an announced death. And that’s what happened,” he said on teleSUR .

“France contained Messi, Argentina’s midfield, so he could not get in behind them.

“Without Messi we are just another team.

“The game was played in a way we anticipated. What we were expecting happened. 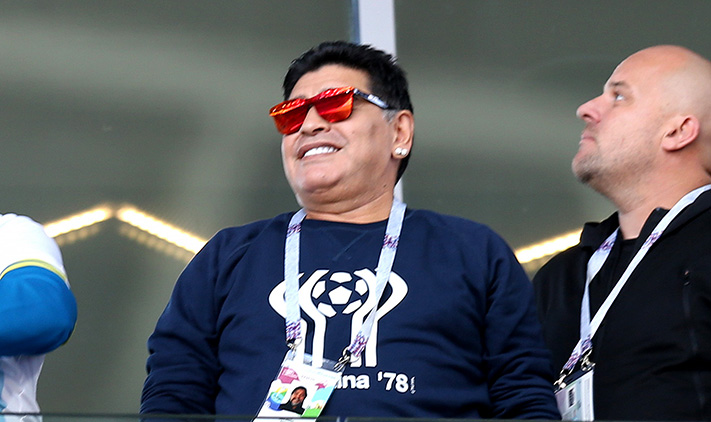 Argentina manager Jorge Sampaoli said that his side lacked a 'clear idea' at the tournament and that their desire to win was potentially greater than the concepts they used to try and achieve victory.

“I think that we adapted to necessity, maybe, rather than having a clear idea,” Sampaoli said.

“We had a clear need, we had to win. That was our main goal, and that was maybe stronger than our football concept. We had the best player in the world [Lionel Messi], and we had to try and create collective situations that allowed us to really use that player.

“We tried many different tactics: surrounding him, creating situations for him. We tried to use everything we had to allow him to do what he can do.

"We can analyse the structure and the performance, but I think there has been a development in this team. They fought until the very last minute and almost equalised at the end, and that’s what I really value.”


popular
Ex-Down boss Paddy Tally will be part of Jack O'Connor's staff if he's offered the Kerry job
Rob Kearney taught a classic GAA lesson when he tried to have the craic in second game back
Shane Lowry had no problem setting reporters straight at Ryder Cup briefing
GAA could learn a thing or two from AFL's parade and self-promotion
The scenes in Newbridge as the biggest hit and hope ever knocks Moorefield out
How one text message a teammate sent Kieran McGeary proves that Tyrone's success was a team effort
"I just knew that Karen was going to be there with us... I absolutely adored her" - Maeve Kelly
You may also like
4 days ago
Mauricio Pochettino responds to Lionel Messi snub during comeback victory
1 week ago
Michael Owen claims PSG are a weaker team because of Lionel Messi
1 week ago
'Riled' Ronaldo sent Rio Ferdinand Whatsapp during on-air Mbappe-Haaland debate
1 week ago
Jamie Carragher and Gary Lineker in Twitter spat over Lionel Messi mistake
1 week ago
Gary Neville and Jamie Carragher finally have the Ronaldo vs Messi debate
1 week ago
The FootballJOE Pub Quiz: Week 5
Next Page