"Manchester United remind me of Arsenal in the later Wenger years."

For Manchester United fans, the question that everyone was mulling before the Premier League's return has been answered by three encouraging performances. Paul Pogba and Bruno Fernandes are starting to hum.

United went close to beating Tottenham as they drew their first game back, with Pogba a positive catalyst off the bench. Pogba and Fernandes both started against Sheffield United and Norwich City as United followed that up with league and FA Cup victories.

END_OF_DOCUMENT_TOKEN_TO_BE_REPLACED

The 20-time league champions have had to watch on as old rivals Liverpool moved to within one title of their record, last week, but many of their supporters have been buoyed by the club's 13-game unbeaten streak and the prospect of Pogaa and Fernandes driving them to greater deeds.

On the latest episode of The Football Spin, Dion Fanning expressed his doubts that Ole Gunnar Solskjaer would ever be a top manager - one of leading his team to trophies on a regular basis - and likened the current United side to Arsenal in their final seasons under Arsene Wenger.

"There would always been a cataclysmic defeat or something terrible would happen and Arsenal fans would be furious and screaming, Wenger Out (signs) and people holding up A4 pieces of paper with who they should sign...

"And then Arsenal would go on a run of some kind - they would go 10 matches unbeaten - and Wenger would be talking about how the players have adapted, have taken the message on board and he feels a new character has developed in the side and how this time it might be different... and then, the next time it really mattered, the same thing would happen to Arsenal. That's where United are now."

While it remains to be seen if those comments are prescient, United can move to within two points of 4th place by beating Brighton away from home on Tuesday. It is United's third game in six days so it will be interesting to see if Solskjaer goes with Pogba and Fernandes in his starting XI again.

Before a ball was kicked in the 2019/20 season resumption, former United star Gary Neville told The Football Spin that he could easily see the French midfielder and the Portuguese playmaker operating in the same midfield. He said:

"To me, I would say that if those two players couldn't work together in a midfield three, with a more defensive player in with them, Olé would take that as a reflection on himself. He can absolutely make that work.

"I saw a team at United that had Scholes, Tevez, Rooney, Ronaldo and Giggs in it that won the European Cup. Sometimes Owen Hargreaves came in, or Ji-Sung Park, but in the big games you had Scholes in midfield with Michael Carrick... if you've got really good players, they should be able to play together." 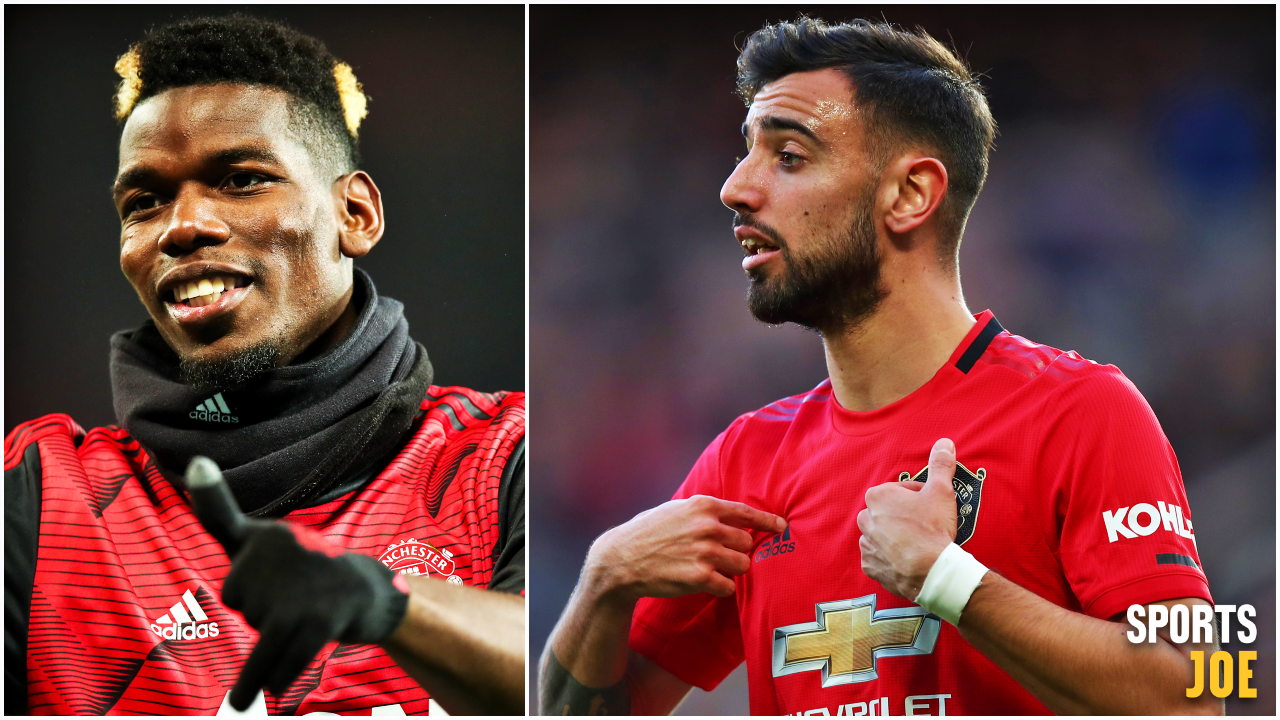 END_OF_DOCUMENT_TOKEN_TO_BE_REPLACED

On Sunday's episode of the show, Nooruddean Choudry of JOE says Bruno Fernandes has looked an astute signing and one that has taken much of the burden off Pogba.

"What United has brought into United, and the change he has instigated, is incredible. He's made everyone else play better and he has given the whole team a different personality; a different mood." Choudry added:

"Funnily enough, for someone who is often criticised for having an out-of-control ego or wanting to be the main man, it's interesting to see that Pogba seems to really appreciate having someone else in there who's taking the limelight.

"Pogba actually, in a quieter way, has been brilliant. He was far better against Norwich and he was exceptional, in an efficient way, against Sheffield United and Tottenham. That's credit to him, but also a credit to Bruno Fernandes... he has been an incredible signing and perhaps it's something that not all fans of other clubs can see."

With Brighton, Bournemouth, Aston Villa and Southampton all coming up in the league, Fernandes and Pogba may yet be able to inspire their team to Champions League football and finish the season with a trophy too.

A burden shared is a burden lifted.

You can listen to the full show on Apple Podcasts, Google Podcast, or Spotify.