Bielsa concerned about financial situation before committing his future

Bielsa has refused to commit his future to Leeds United

Concerns over finances next season may mean Bielsa leaves Leeds United over summer, it is reported.

The Yorkshire side's head coach refused to commit to the club following the teams crushing defeat to Derby County at Elland Road during a post-match press conference, although he added that he would "listen to offers" from the club.

According to The Telegraph, Bielsa will seek assurances over the club's financial situation before he signs a contract extension, as he is worried he may be forced to sell the side's best players in the transfer window.

Asked about whether he would continue with the club on Wednesday night, Bielsa said: "As you can imagine, it's not convenient to talk about this right now. This process, you know about it, is that if the club offers me the possibility to carry on I will listen to their proposal."

The Argentinian earns more than £3 million a year in his role at the club, making him easily the best-paid manager in the Championship. Fans of the club are desperate for him to remain at the helm, having transformed the side from mid-table the season prior, to falling just short of automatic promotion this year. 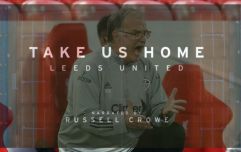 END_OF_DOCUMENT_TOKEN_TO_BE_REPLACED

It comes after Leeds chairman Andrea Radrizzani was forced earlier this season to deny rumours that he would have to sell the club if they failed to make the Premier League.

However, the Yorkshire Evening Post has reported that the club are keen to secure the former Lazio and Athletic Bilbao manager for another season, having already spoken with Bielsa about making fresh changes to their training ground at Thorp Arch. It is also reported they are willing to make further investment in the side in order to retain his services.


popular
Lock yourself in because the sport on TV this weekend is hilarious
Paul O'Connell names four Irish certainties for Lions, and one bolter
The SportsJOE 12 o'clock quiz | Day 223
Maher defying the odds in a bid to turn it around for Dublin
"It was a diluted version of what we were" - Why 'Donegal system' didn't work for others
Alisson criticises Jordan Pickford for Van Dijk challenge
Warren Gatland mentions three Irish players as potential Lions captain
You may also like
1 month ago
Leeds United make approach to sign Julian Draxler from PSG
2 months ago
Leeds on the move with deals for centre back and centre forward edging closer
3 months ago
Leeds United are back
1 year ago
Leeds documentary drops tomorrow and the Bielsa story is compelling
1 year ago
PSG's Qatari owners reportedly holding talks with Leeds United over takeover
1 year ago
Frank Lampard racks up enormous bar bill after Derby County beat Leeds United
Next Page