Another hearing is set to take place on November 15

Benjamin Mendy is set to remain in prison until the date of his trial on January 24.

The Manchester City footballer is currently facing four counts of rape against three women. He is accused of attacking them at his home in Cheshire between October 2020 and August 2021. 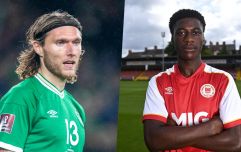 END_OF_DOCUMENT_TOKEN_TO_BE_REPLACED

He is also charged with one count of sexual assault.

On Friday, he appeared at Chester Crown court to face the charges.

He will now remain behind bars until his next court appearance on November 15, with a date for the trial currently set for January 24.

Since being charged Mendy has been suspended by his club, Manchester City, who he joined from Monaco in 2017. His suspension will last until the conclusion of legal proceedings.


popular
"It’s hard not to respect Johnny, even if you don’t like him!" - Dan Biggar
Martin McHugh: Them lads were stronger than the modern day player who's lifting weights all the time and doing no manual work
"I was in the Blackrock end goal looking up to the heavens saying, "Get us through it" - Kerins following his late father's footsteps
Quiz: Which footballer has played more times for Ireland?
Dessie Farrell set to cut large chunk of Dublin players as panel is reduced for league campaign
Sky Sports presenter explains why Roy Keane and Graeme Souness are so critical of players
"I missed two senior championship games in the Gaelic and it was eating me up inside" - Bradley-Walsh getting a lot done
You may also like
2 days ago
"Oh my God!" - Anton Ferdinand on Roy Keane's infamous half-time rant at Ewood Park
3 days ago
"He’s got to show what’s between his legs now." - Warnock accuses refs of big club bias
3 days ago
Roy Keane has heaped praise on Trent Alexander-Arnold
4 days ago
"I'm a bit wary of saying they've gone sloppy in case Klopp comes after me!" - Roy Keane
5 days ago
Hard to argue with Declan Rice assessment of Man United's late winner
5 days ago
Duncan Ferguson buys drinks for Everton fans before Aston Villa clash
Next Page