Belgium have been banned from wearing another kit by FIFA at the World Cup meaning that should anymore be confiscated, they won't have a kit to play in at all.

Less than 24 hours after being told they would not be able to wear their away kits unless they removed the word 'love' from the collar, the international governing body have now decided they have an issue with another one of their kits.

This time round they have taken an issue with the side's training kits. Voetbal Belgie have reported that they have been barred from wearing the warm-up shirts as they are "too colourful."

As expected the decision has left Belgian FA CEO Peter Bossaert extremely disappointed. It comes after he hit out at the news that they wouldn't be able to wear their away shirt on Monday. 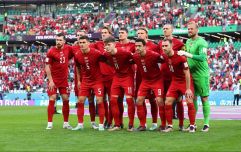 END_OF_DOCUMENT_TOKEN_TO_BE_REPLACED

Additionally, they were also told they were not permitted to wear the 'One Love' armband after they and the other nations planning to take part were threatened with sanctions which included their captains being booked before kick-off.

"We are frustrated with FIFA's decision, but we cannot put our players in positions where they can receive sporting sanctions.

"So that is why we asked them not to play with the 'OneLove' captain's armband at the World Cup.

"We were willing to pay fines, but we don't want to put our players at risk of getting a card or even having to leave the field.

"We had already informed FIFA in September of our desire to play with to play the armband, but there was never any response.

"We have been in solidarity with the participating countries all along by wearing the band. You can't just break that solidarity now.

Belgium face Canada in their opening game on Wednesday.


popular
Talksport presenter puts Martin O'Neill to the pin of his collar over Declan Rice and Jack Grealish
Roy Keane scores winning goal past Micah Richards in ITV v BBC pundits match
Rory McIlroy explains 'falling out' with Shane Lowry that lasted a few years
World Cup Power Rankings: The top 10 players at the tournament ahead of the quarter-finals
Ballyhale's Colin Fennelly felt Ballygunner's victory speech was disrespectful
"There's no soccer, hurling, or rugby" - Kilcoo's secret to success
Gary Neville sticks up for Ronaldo as contextless pictures and videos taken as gospel
You may also like
2 weeks ago
Ian Wright, Karen Carney and Roy Keane tear strips off FIFA with powerful protest comments
2 weeks ago
German FA considering legal action against FIFA over OneLove armband
2 weeks ago
FIFA reportedly order Belgium to remove 'love' from away shirt collar
1 month ago
How Ecuador escaped being kicked out of World Cup over ineligible player
1 month ago
The bridesmaids of the Ballon d'Or: Past winners if there was no Cristiano Ronaldo or Lionel Messi
2 months ago
Ecuador could be kicked out of World Cup after leaked recording confirms Byron Castillo was born in Colombia
Next Page