Barcelona breezed to a 6-1 victory at home to Eibar on Tuesday night, with Lionel Messi helping himself to four goals.

Luis Suarez was rested for the game and watched on from the bench, with new signing Ousmane Dembele also missing out after being sidelined with an injury.

The French international, a summer arrival from Borussia Dortmund, picked up the injury during the weekend win away to Getafe. A club statement has since confirmed that he has ruptured the biceps femoris - one of the muscle tendons in the hamstring - and underwent surgery on it in Finland on Tuesday. The 20-year-old is expected to be out of action for around three-and-a-half months. 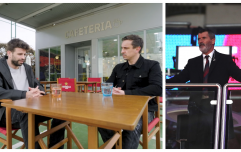 END_OF_DOCUMENT_TOKEN_TO_BE_REPLACED

Clearly, this is a blow for the player - especially as it comes so soon after securing a big-money move to a new club. As a show of support for their new teammate, Barca's players wore t-shirts carrying a special message for Dembele ahead of kick-off against Getafe.

Despite the good intentions of Barca's players, the gesture was mocked by many of those that saw it on social media.

Dembele is not dead Ffs😂😂

Dembele out with a bad hammy a little over the top I'd have a wardrobe full of shit tshirts with my bastard hamstrings! pic.twitter.com/s2CKIq3f3f

This isn't the first time in the last twelve months we've seen football players come up with such a tribute to an injured teammate. Manchester City's players wore shirts with Ilkay Gundogan's name and number on ahead of a game against Arsenal last December. The German international had picked up a cruciate knee injury days in a game against Watford days earlier. Manchester United players also did something similar for Zlatan Ibrahimovic and Marcos Rojo after the pair injured their knees in a Europa League game against Anderlecht in April.


popular
Noel Gallagher left 'covered in blood' after headbutt from Ruben Dias’ dad
Cutting through the contradictions from one of the worst television segments of the year
Aiden McGeady details the abuse he suffered after playing for Ireland instead of Scotland
Roy Keane shows great comic timing after Jack Grealish party invite
BBC apologise after accidentally posting mocking Man United message live on TV
The FootballJOE Pub Quiz: Week 38
France the sore losers as Ireland Men reach first ever Sevens World Series final
You may also like
3 weeks ago
You're Paul Pogba. Choose your next club
1 month ago
Gerard Pique denies any wrongdoing after leaked audio of Super Cup discussion emerges
1 month ago
How Lionel Messi was signed for Barcelona on a paper napkin
1 month ago
RB Leipzig 'regret' signing 'immature' Ilaix Moriba from Barcelona
2 months ago
Philippe Coutinho's astronomical wages could prevent Aston Villa permanent transfer
3 months ago
Ferran Torres visibly upset after missing late chance in Napoli draw
Next Page