The two Madrid sides face each other at the Wanda Metropolitano on Sunday night but there were unsavoury scenes in the build-up to kick-off.

Earlier this week, the Brazil international was the victim of another viral racist attack live on Spanish TV. 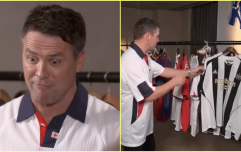 END_OF_DOCUMENT_TOKEN_TO_BE_REPLACED

Pedro Bravo, president of the Spanish Agents Association, had taken issue with the Brazilian dancing when celebrating his goals and, during an appearance on El Chiringuito TV, said he should 'stop playing the monkey'.

Bravo later retracted his statement but was heavily criticised for his comments, with Vinicius heavily supported by many of his friends and family.

The 22-year-old also posted a video to social media in which he promised to continue celebrating goals as he chooses and that he has invested his own money in helping prepare the future generations to be ready to fight against racists and xenophobes.

He said: "As long as skin colour is more important than the brightness of the eyes, there will be war; I have that phrase tattooed on my body.

END_OF_DOCUMENT_TOKEN_TO_BE_REPLACED

"I have that thought permanently in my head. That's the attitude and philosophy that I try to put into practice in my life. They say happiness is annoying. The happiness of a victorious Brazilian black in Europe bothers much more.

"But my desire to win, my smile and the twinkle in my eyes are much bigger than that. You can't even imagine. I was a victim of xenophobia and racism in one statement.

"They are dances to celebrate the cultural diversity of the world. Accept it, respect it. I ain't stopping. I come from a country where poverty is very high, where people don't have access to education.. and in many cases, no food on the table! I don't usually come to publicly rebuttal to criticism.

"I get attacked and I don't speak up. They praise me and I don't talk either. I work ! I work a lot. On and off the field. I have developed an app to help children's education in public schools without financial help from anyone. I'm making a school with my name. I'll do much more for education. I want the next generations to be prepared, like me, to fight against racists and xenophobes.

"I always try to be a professional and an exemplary citizen. But that doesn’t click, doesn’t trend on the internet, or motivates cowards to aggressively talk about people they don’t even know. The script always ends with an apology and a 'I was misunderstood.'

"But I repeat it to you racists: I will not stop dancing. Whether at the Sambódromo, at the Bernabéu or wherever. With the love and smiles of the very happy, Vini Jr."

You may also like
14 minutes ago
Richard Dunne slams Man United for pandering to Ronaldo during games
1 hour ago
Conor Benn's 'banned substances' comments in 2019 have not aged well
2 hours ago
Your guide to a superb weekend of football, rugby and F1 and how to stream it all
3 hours ago
QUIZ: Name the 2018 World Cup Goalscorers
3 hours ago
Gary Neville confirms he will work for Qatar's beIN Sports during World Cup
3 hours ago
Denmark players will head to Qatar without families to protest human rights
Next Page