Cristiano Ronaldo's hopes of leaving Manchester United this summer appear to have taken yet another blow with Atletico Madrid fans launching a social media campaign to express their opposition to his potential arrival.

It became clear earlier this month that Ronaldo - not even a year on from sealing his return to Old Trafford - wanted to leave United after they failed to secure Champions League football for the coming season.

Lack of interest in Ronaldo

END_OF_DOCUMENT_TOKEN_TO_BE_REPLACED

Unfortunately for the 37-year-old, it's since transpired that there appears to be a dearth of clubs willing to take him.

New Chelsea owner Todd Boehly was said to be open to bringing him to Stamford Bridge, though hopes of a move to London were dashed when manager Thomas Tuchel reportedly told the American he was not interested in adding him to his ranks. A transfer to Bayern Munich also seemed possible with the departure of Robert Lewandowski to Barcelona, though the Bundesliga champions have also ruled out a move for him.

Some Atleti fans against a potential move 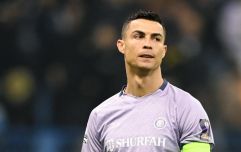 END_OF_DOCUMENT_TOKEN_TO_BE_REPLACED

Atletico Madrid, meanwhile, do seem interested. Diego Simeone is said to be keen to add Ronaldo to his squad, with some reports claiming the club were even willing to sell Antoine Griezmann to free up funds.

During his time there, he became their all-time leading goalscorer and helped them to four Champions League titles - twice beating Atleti in the final. 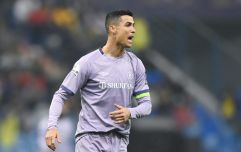 END_OF_DOCUMENT_TOKEN_TO_BE_REPLACED

His association with Los Blancos has seen many Atleti fans call for the club to abandon their pursuit. Many have taken to Twitter to demand the club drop any attempts to sign him, using the hashtag #ContraCR7 (AgainstCR7).

'Just thinking that such a guy wears the Atleti shirt makes me sick to my stomach,' one of the tweets using the hashtag read. 'It goes against everything it means to be from Atleti.'

Ronaldo was given permission to miss United's pre-season tour of Thailand and Australia due to family reasons. He has since been pictured training in Lisbon. It remains unclear when he is expected to report back for training with United should a move elsewhere fail to materialise.


popular
Ireland team to play Wales: Andy Farrell's XV, the big calls and bold cuts
Roy Keane reminds everyone of his feelings towards Newcastle United ahead of cup final against Man United
Even Roy Keane felt Michael Dawson went too far with his remark to Tom Heaton
Everton release brutal 59-word statement to confirm Anthony Gordon departure
Ireland's self destructive mentality kills Croke Park fight for Katie Taylor
"Every team did it!" - Paul O'Connell on Roy Keane comment to Ronan O'Gara that he couldn't deny
True beauty of Fitzgibbon and Sigerson Cups lies in the hearts of weaker counties
You may also like
5 days ago
Piers Morgan provides Cristiano Ronaldo Saudi Arabia update
1 week ago
Cristiano Ronaldo told Jorge Mendes they were 'done' if he failed to find big transfer
2 weeks ago
Cristiano Ronaldo struggling to find £4,500-a-month chef at his 'retirement home'
2 weeks ago
Eric Cantona was not impressed with Cristiano Ronaldo's attitude at Man United
3 weeks ago
Al Nassr deny Cristiano Ronaldo's contract contains World Cup clause
3 weeks ago
How one of Cristiano Ronaldo's Ballon d'Or trophies ended up with Israel's richest person
Next Page