It's the nature of this type of opposition that a few minutes is all it takes.

You hear it from any team stepping up to compete in the Premier League, how all their mistakes are punished like never before. How the pace is a different level - both the speed of the of the players and the game.

And it was a few minutes before half time that was enough to undo Dundalk. A strong first half showing had people sitting up. It had Arsenal fans panic as they failed to really cut open the Irish side who had a couple of sights at goal themselves and were able to hold onto the ball for spells to take the pressure off. 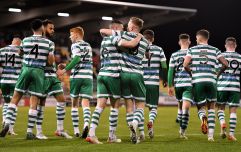 END_OF_DOCUMENT_TOKEN_TO_BE_REPLACED

But one misjudged corner by Gary Rogers, one deflection of a defender and an Arsenal player reacting quickly and, suddenly, all of the effort and good work from Filippo Giovagnoli's side was made redundant. Seconds, later, the lead was doubled and moments after that, you're sitting in the Emirates dressing room at half time, 2-0 down to Arsenal.

In the end, the Gunners were worth their 3-0 win but their manager Mikel Arteta was still impressed with what he saw from Dundalk. 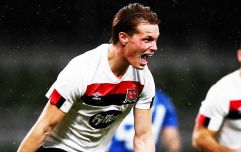 END_OF_DOCUMENT_TOKEN_TO_BE_REPLACED

The result leaves Dundalk bottom of Group B having already lost to Molde but a trip to Austria for a clash with Rapid Vienna - also yet to get off the points mark - lies in store on November 5.

After the game in London, Mikel Arteta explained how they didn't take the challenge of Dundalk in any way lightly.

"We gave them our respect because I think it's a team that deserves it," he said.

"Because we were so serious and committed, I think we were comfortable in the game."

▪️ His assessment of the game.
▪️ His HT team talk after the 2 goals.
▪️ Competition for places in his team.#ARSDUN | #CmonTheTown#UEL | #VMSport pic.twitter.com/gUAkbk0iFb