Conte is looking to sell the Tottenham quartet

Tottenham Hotspur boss Antonio Conte has told four players to train away from the first team as he looks to sell players who are surplus to requirements.

Tanguy Ndombele, Giovani Lo Celso, Sergio Reguilon and Harry Winks have all been told they can train on their own and haven't been involved since Spurs returned from their pre-season tour of South Korea. 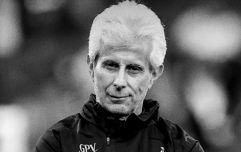 END_OF_DOCUMENT_TOKEN_TO_BE_REPLACED

The Evening Standard have reported that the quartet were told that they could no longer be a part of the first-team sessions as Conte could only work with a certain number of players.

Conte and co are keen to find them all a new club before the end of the transfer window (September 1). The most high-profile of those is Ndombele, who joined Spurs for a club-record fee of £65m in 2019.

However a series of below-par performances saw him lose his place in the side and the Frenchman spent last season on loan at his former club Lyon. The arrival of Yves Bissouma has also seen him fall further behind in the pecking order. 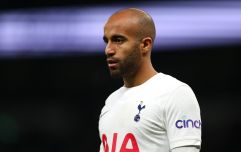 END_OF_DOCUMENT_TOKEN_TO_BE_REPLACED

Lo Celso has also returned from a loan spell to find himself no longer in contention at the North London club after spending last season on loan at Villarreal.

Reguilon and Winks meanwhile did feature - albeit sporadically towards the end of the season - with other players preferred to them in their position.

Spurs have been busy this summer and made six signings, bringing in: Ivan Perišić, Richarlison, Fraser Forster, Djed Spence, Bissouma and Clément Lenglet.

Tottenham face London rivals Chelsea in their next Premier League game after an emphatic start which saw them beat Southampton 4-1.


popular
Shane Lowry on his Tuesday duels with Rory McIlroy at The Bear's Club
Gary Neville confirms he will work for Qatar's beIN Sports during World Cup
QUIZ: Name the 2018 World Cup Goalscorers
Ex-Anthony Joshua opponent hopes Chris Eubank Jr gets brain damage
QUIZ: Can you name the sponsors of all 32 of these old county jerseys?
Predicting the 31 biggest knock-out championship games around Ireland this weekend
Sean O'Brien to join Naas RFC so he can play All-Ireland League rugby
You may also like
1 month ago
No nonsense pundit surprisingly comes to the defence of Richarlison's showboating incident
1 month ago
Man United have 'decided to sell' promising midfielder James Garner
1 month ago
Antonio Conte and Thomas Tuchel get in two fights as Spurs strike late to stun Chelsea
2 months ago
Troy Parrott set to sign for Preston North End on loan from Tottenham
2 months ago
Troy Parrott reveals Antonio Conte advice as clubs line up for Ireland forward
2 months ago
Harry Kane and Son Heung-min 'collapse' in brutal Tottenham Hotspur training session
Next Page