Goalkeeper Andrew Redmayne became an overnight hero for Australia as his heroics in the penalty shoot out secured the Socceroos' place at the World Cup against Peru.

Neither side could be separated after 120 minutes of football and with penalties lurking ever closer, manager Graham Arnold chose to substitute first-choice 'keeper Mat Ryan for Redmayne with the shoot out obviously in mind.

END_OF_DOCUMENT_TOKEN_TO_BE_REPLACED

It was a bold decision to make but one that paid off as the 33-year-old stole the show with some hilarious mind games as he danced on his penalty line.

The shoot out went to sudden death but the Sydney FC shot-stopper stepped up to the plate and denied Alex Valera, sparking wild celebrations amongst his teammates, who quickly partied away with him. 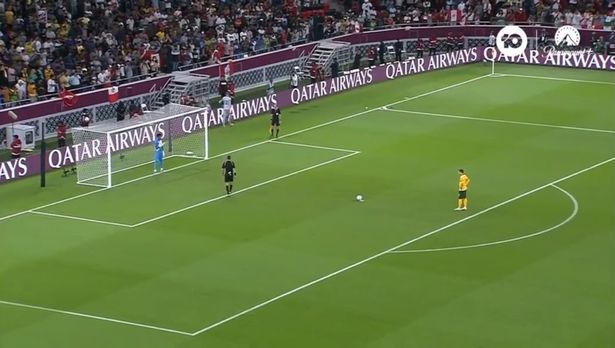 END_OF_DOCUMENT_TOKEN_TO_BE_REPLACED

In amongst all the madness of Redmayne's top-tier s***housery, there was a golden moment that went somewhat amiss before the penalties had even been taken.

One practice that is becoming more common with goalkeepers nowadays is to have penalty instructions written on their water bottles in the event a shoot out occurs - just ask Nottingham Forest's Brice Samba.

Peru's Pedro Gallese took this advice as he had notes for all of Australia's penalty takers stuck to his bottle - but Redmayne didn't want him to have any advantage.

One fan claimed on Twitter that the 'keeper had spotted the bottle and threw it into the crowd in Doha, leaving Gallese searching for his trusted guide.

A video below though shows Redmayne picking up the bottle and placing it behind one of the advertising boards. Incredible.

Lo and behold, Gallese failed to save another penalty and Redmayne became the hero. Surely it's only a matter of time before he has a statue.