The Spaniard's contract expires at the end of this season and the club appear to have failed to convince him to stay, despite reportedly offering to almost double his wages, according to Forbes.

It is reported that United offered the shithouse extraordinaire a four year deal and almost double his current wage, which would have been significantly more than he would be paid elsewhere. Herrera's agent pushed United to offer as much as £300,000 per week but the club refused.

Herrera looks to have made up his mind now, and is understood to be in talks with Paris Saint-Germain who are looking to add some experience and steel to their midfield this summer, and are willing to pay the 29-year-old as much as £200,000 per week.

Despite this contract stand off, United boss Ole Gunnar Solskjaer insists he will continue to select Herrera when he is fit.

"Maybe the future might have been worrying him and that's part of the reason he's injured," said Solskjaer.

"Who knows? Hopefully he can be available for Chelsea or [Manchester] City but I'm not sure. He's got another muscle injury. 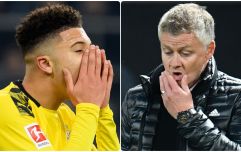 END_OF_DOCUMENT_TOKEN_TO_BE_REPLACED

"He's been working really hard to get fit from his injury he sustained against Liverpool, then he came back and got a different one here in training.

"He's been putting a lot of work in and that's come at a time when there are contract talks but that's ongoing. I can't really comment too much on how far they are down the line, you'll have to ask him.

"I don't know how they've been the last few talks, but we've let him focus on his fitness as well.

"He loves to play and he's not very happy when he can't help his team-mates and always giving his all. It doesn't matter it it's five weeks or five years on his contract."

popular
"My job at Sky is not to be a cheerleader for Rory McIlroy" - Paul McGinley
QUIZ: Can you guess the football shirt sponsors of these classic 90s kits?
"He's found a way to do it. Whether that's good or bad for the game, I don't know"
Sam Bennett's green jersey masterclass got Lance Armstrong talking
The SportsJOE 12 o'clock quiz | Day 187
QUIZ: Identify the football club from these 12 crests
Only old-school fans will get 20/20 in this 1990s footballers quiz | Part 2
You may also like
2 days ago
Manchester United's transfer excuses are simply not good enough
2 days ago
Alex Telles 'hopeful' of becoming a Man United player imminently
2 days ago
Rio Ferdinand story about Dwight Yorke conversation shows Alex Ferguson's ruthless streak
4 days ago
Luke Shaw steps up to make common sense plea to Ed Woodward
5 days ago
Ed Woodward explains Manchester United's lack of transfer activity
1 week ago
QUIZ: Can you name the 5 Man United players in 15 seconds?
Next Page