Fans of the United States' football team have been getting their excuses in early after a Copa America draw.

Jurgen Klinsmann's team are special invitees for the centenary of the competition, but that hasn't stopped soccer truthers coming out in force after a tough draw landed the hosts with group stage matches against Colombia, Costa Rica and Paraguay.

There's a surprising sense of entitlement from a country playing only its second Copa of the century, though fans may be upset to have avoided relative minnows Jamaica, Haiti and Panama.

I love how this Copa America draw is just an extended in-joke on the fact that international football in the Western Hemisphere is rigged.

Copa America is already rigged and the tournament hasn't started yet

USA must have not donated enough money to copa America #rigged

This Copa America draw is rigged 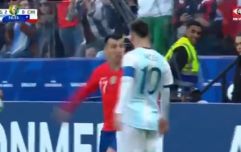 END_OF_DOCUMENT_TOKEN_TO_BE_REPLACED

For balance, we should point out that this was not a view shared by all fans of the US Men's National Team, as they are best known.

Plenty took a more realistic approach to things, as ought to be the case if the team is to be considered a genuine challenger for honours.

I can’t imagine a scenario where this draw determines the #USMNT’s fate at Copa America. Whether they can improve a lot in four months will.

The USMNT can get out of Group A. But they can also lose every single Group A game. Few will be surprised either way, which is telling.

Difficult draw for #USMNT. No easing into the tournament.

And it could have been worse, given their last two World Cup exits.

popular
The SportsJOE 12 o'clock quiz | Day 77
QUIZ: Can you name all 24 champions of the English football league?
You'll need to be on top form to get 20/20 in this 1980s footballers quiz
The SportsJOE 12 o'clock quiz | Day 75
If you can answer this one Premier League question, you really know your stuff
The SportsJOE 12 o'clock quiz | Day 76
SportsJOE 2000s Football Quiz | Round 4
You may also like
11 months ago
Lionel Messi sounds off on 'bull****' officiating following Brazil loss
11 months ago
Luis Suarez's night of madness offers glimpse of how his mind truly works
11 months ago
Alexis Sanchez' Chile form offers route for Manchester United redemption
3 years ago
GRAPHIC: Alexis Sanchez's ankle was hideously swollen following Copa America victory
3 years ago
Watch: Gonzalo Higuain somehow missed this chance to win the Copa America
3 years ago
Lionel Messi retires from international football
Next Page