The USA striker came out to explain her actions to the media, again, as this odd wee story refuses to go away.

Four days on, the shockwaves are still being felt.

Following the USA's 2-1 semi final victory, Morgan spoke to reporters about her new celebration. There was no mention of it being anything against the English team themselves, or American Revolution connotations. Morgan said:

"I wanted to keep it interesting. I know Megan Rapinoe has the best celebration. I had to try and step up this game.

"I feel like this team has had so much thrown at them and us. I feel like we didn’t take an easy route through this tournament and ‘That’s the Tea’."

Except here we are. Rapinoe had the best response to a reporter who asked about the caffeine-toting celebration, on Wednesday. The Californian replied:

U.S. forward Megan Rapinoe on Alex Morgan's tea cup celebration: "I think I might have been upstaged. That was next-level."

And on English criticism of the tea cup celebration: "Wah, wah, wah... I don't think anyone truly believes we disrespect opponents."@sntvstory pic.twitter.com/XaCgGTsiKq 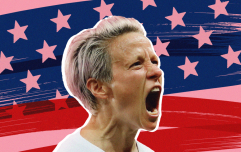 END_OF_DOCUMENT_TOKEN_TO_BE_REPLACED

The Americans have been looked upon as the bad girls ever since they stuck 13 goals on a hapless Thailand side and celebrated each one like it was the winner in this Sunday's final.

Morgan led the line brilliantly against England and won a few handy frees with theatrics, Lindsey Horan and Alyssa Naeher were scolded by an English player and journalist for celebrating too near to a sombre post-match interview and now we have Ali Krieger backing up Rapinoe and saying there's no way she would go to the White House, either, if the USA retained their World Cup trophy.

It has been brilliant to see a side embrace the dark side, and have fun with it.

So it was somewhat deflating to hear Morgan actually try to explain away the celebration again. The first part of the striker's take on Tea-gate saw her try to justify her actions... and then she obviously thought, 'Feck this' [or the American equivalent].

'That's the tea', she said, was her way of telling a story or saying 'Here's the news'. Lame enough, but she was only getting started.

"I feel that there is some sort of double-standard for females in sport. I feel we have to be humble in our success and we have to celebrate, but not too much... It always has to be in a limited fashion.

"You see men celebrating all around the world in big tournaments, grabbing their sacks or whatever it is. And when I look at sipping a cup of tea, I'm a little taken aback. You have to laugh about it, to see all the criticism."

Come out swinging and blasting the lads for scoring goals them grabbing their sacks and parading them about like wanton hoons.

This USA team will not be forgotten in quite a while. It is rarely dull when they are on the hunt for gold.