Back in the summer of 1993, Roy Keane had a verbal agreement with Blackburn Rovers manager Kenny Dalglish to join the club from Nottingham Forest. It would be the first of two moments that could have ended with Keane and Alan Shearer being teammates.

There had been a "gentleman's agreement" with Keane and the former Liverpool player and manager. The midfielder put in a string of fine performances for Forest, but it was not enough to prevent their relegation to the Championship. The two-time European Cup winners ping-ponged between the top tiers for a stretch after that but have not played in the Premier League since 1999.

END_OF_DOCUMENT_TOKEN_TO_BE_REPLACED

Around this time, Blackburn, financed by chairman Jack Walker, were building a team that could compete for league titles. Alan Shearer had been signed for £3.6m from Southampton in 1992 and, though affected by a knee injury, scored 22 goals in 26 appearances. He was back fully fit for the 1993/94 season, and Blackburn also brought in goalkeeper Tim Flowers, the versatile Paul Warhurst and midfielder David Batty.

Batty was signed from Leeds after Roy Keane left Dalglish stunned, then enraged, by deciding to join Manchester United. Most Irish football supporters will be aware of Keane having his mind changed after a one-to-one with then United boss Alex Ferguson. Dalglish later admitted he told Keane, "You've made a bad move."

Ferguson had been the manager who knocked Liverpool off 'their ****ing perch' and both he and Dalglish had a healthy rivalry. There was respect there, too, says Shearer, but the two Scots loved getting one up on the other.

During an episode of 'Match of the Day: Top 10', Alan Shearer revealed the minor role he played in the night Dalglish found out Ferguson had snatched Keane from under his nose. 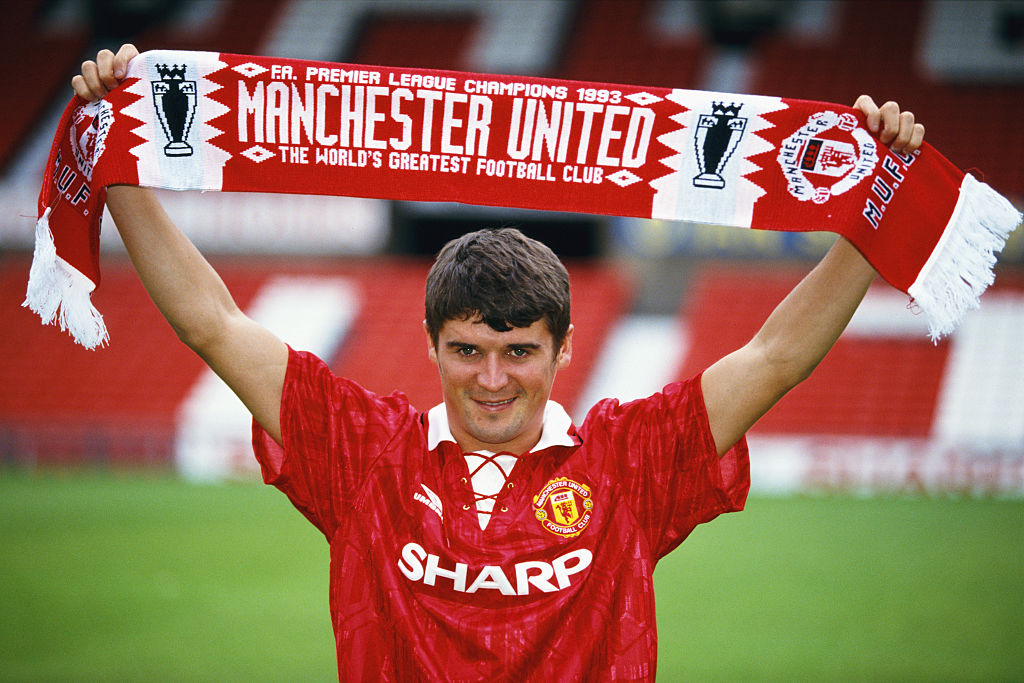 New Manchester United signing Roy Keane poses with a club scarf at Old Trafford after signing from Nottingham Forest ahead of the 1993/94 season. (Photo by Mike Hewitt/Allsport/Getty Images)

The Match of the Day episode, another enjoyable run-through with Gary Lineker as host and guests Micah Richards and Alan Shearer, focused on top 10 managerial rivalries.

"There was huge respect between them. Two giants of football," Shearer began. "but, I mean, Kenny used to take the piss, all the time, out of Sir Alex [Ferguson], and Sir Alex used to do the same.

"Not long after I signed for Blackburn, I was out in a restaurant with Kenny and his family. Kenny went out on the phone and I thought, 'Okay, he must be doing a little bit of business'. And he comes back in with this huge grin on his face.

"And then, about two hours later and after him celebrating with a couple of glasses of red wine, he's gone back outside. And he came back in with a face like ****ing thunder!

"Oh my God, he was seething. So it could have been oh so different."

END_OF_DOCUMENT_TOKEN_TO_BE_REPLACED

Keane was an instant success at United and helped them to a league and FA Cup double in his first season there. Shearer and Dalglish got a small measure of revenge by pipping United to the league title in 1994/95, but Ferguson, as he so often did in his managerial career, made some bold calls and reeled off further league wins in 1996 and 1997, as Blackburn began to falter.

Shearer was the one that left Ferguson seething, in 1996, when he turned down Manchester United for the second time, this time opting to join Newcastle United for £15m. Shearer and Keane had a few run-ins over the years, with the Ireland midfielder once seeing red for having a go at Shearer at St James' Park.

The full Alan Shearer clip is below, and forgive the MOTD Twitter admin for the excitement over a story Irish football fans know all about.

Who knew Roy Keane was this close to joining Blackburn Rovers?!#MOTDTop10 #Rovers #MUFC

As for Kenny Dalglish, he eventually cooled down and memorably collared Keane at a function they were both at.

During a charity event, in 2018, that both Keane and the former Liverpool and Blackburn boss appeared at, Dalglish said, "The next time I saw you, you'd won about three [league championships], a European Cup. I said, 'I told you you'd made a mistake!'"


popular
Man United could be blocked from playing in the Champions League next season
Ireland team vs. France: Form players rewarded and a welcome return
Clive Woodward happy to 'eat humble pie' after bold comments about Ireland
Man United's four player transfer shortlist if Qatar takeover goes ahead
Man City expect Pep Guardiola to leave
The Ireland team Andy Farrell needs to start when France come to town
"I should have been more mature" - O'Sullivan's injury trail a cautionary tale for Sigerson casualties
You may also like
1 day ago
Casemiro explains why his name has been spelt wrong his whole career
1 day ago
Man United vs Leeds: Why the game won't be shown on Irish TV
3 days ago
Erik ten Hag draws up three-player transfer wishlist for summer window
3 days ago
Man United ponder appeal as new footage of Casemiro red card incident emerges
3 days ago
Man United squad don't want Mason Greenwood back in changing room
4 days ago
Alex Ferguson on how Owen Hargreaves was 'one of the most disappointing' signings he made for Man United
Next Page