Alan Shearer hits back at Match of the Day critics

It's not an easy gig, their main sell is the highlights and the analysis is under strict time constraint so it either has to be rushed, inconclusive, or it has to just leave out talking points. That results in outrage because, let's face it, football fans aren't the most rational on weekends and, when their team loses and your gripes aren't aired, scapegoats are going to get hung. See: Lukaku kick omission from last week's episode.

The last thing one of these pundits should do is be on Twitter but Alan Shearer, despite the fire he probably feels beneath him every Saturday night, fronts up to the abuse. This time though, he fired back. 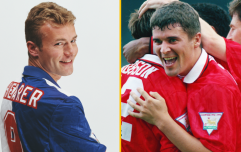 END_OF_DOCUMENT_TOKEN_TO_BE_REPLACED

As good as Troopz's meltdown was though, it was DT's video that gained the most traction.

But it only gained the most traction because he had the audacity to call out Alan Shearer after Match of the Day.

The Arsenal fan took exception to Shearer's assessment that the Gunners couldn't live with United.

'Manchester United were different class today and Arsenal couldn't live with them...'

Get to @Specsavers mate, old age has creeped up on you!

During Arsenal Fan TV, the same boy had broken down how bad his side were at the back. Luckily, Shearer had his quotes to hand.

Absolute state of you @MrDtAFC:

"Shambolic defending. Can't say anything else."

"We have conceded 19 goals. Swansea who are BOTTOM have conceded 18 goals."@ManUtd scored 3, hit the post, missed a one-on-one. You had a lot of possession though. 👏🏻👏🏻 Who needs @specsavers? https://t.co/YNI3saRwBt

76% possession, a very bad defensive unit and David De Gea in the other team isn't going to do much for any team but that wasn't enough for the England legend to leave it there as he started to bite back at attacks coming from elsewhere.

From a lot of places.

It all started with so much hope.

But some people's ability to listen always lets them down.

United fans starting to forgive his snub with every tweet.

At least he has a backer in high places.