Alan Judge and his club have responded strongly to the accusation made in the midweek hearing.

Referee Darren Drysdale is free to officiate again having received a backdated ban for improper conduct for his clash with Ipswich Town's Alan Judge last month.

Drysdale came face to face with Judge during the closing minutes of Ipswich's game with Northampton after declining a penalty appeal from the Irish international. Instead, he deemed Judge had dived and booked him for simulation. Drysdale later apologised and admitted a breach of FA rules for his confrontation with Judge.

Speaking at a hearing, the referee said that his response had been out of character, but followed the worst abuse he had ever received during his time as an official. Explaining what happened, he said:

"Alan Judge exaggerates his fall in a desperate attempt to gain a penalty. I then processed what had happened for a few seconds before blowing my whistle and decided to caution Alan Judge for an act of trying to deceive a match official.

"As I blew my whistle Alan Judge shouted aggressively in a loud voice at me - and from a distance of only five metres - "It's a f***ing penalty you cheating bald c**t!"

"Reacting completely out of character, I took exception to what I considered to be an offensive comment.

"I walked towards Alan Judge who then continued his tirade of abuse as he then, what I deemed as aggressively and provokingly, pointed his finger towards my face and shouted, "You're a f***ing cheating c**t!"

"I accept that I should not have moved my head towards Alan Judge as this only inflamed the situation. At no time was there any physical contact between myself and Alan Judge." 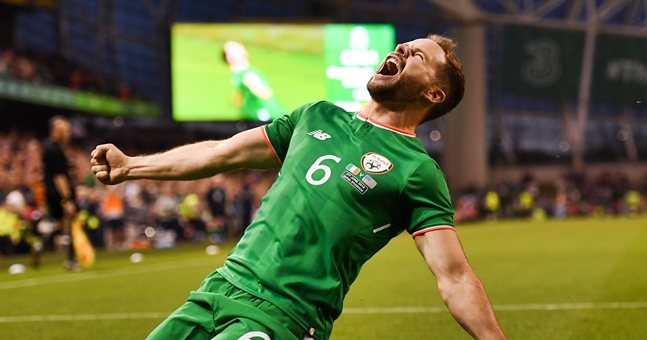 Alan Judge celebrates after scoring his Ireland's second goal against the USA in 2018. (Photo by Stephen McCarthy/Sportsfile)

END_OF_DOCUMENT_TOKEN_TO_BE_REPLACED

That statement prompted a categorical denial from Judge and a strong statement from Ipswich Town.

“I said the incident was over as far as I was concerned when I walked off the pitch and that I wasn’t looking for an apology," Judge told the Ipswich Town website.

"I didn’t want to make anything of it because it’s a tough job being a referee but I’m not going to keep quiet when I’ve been accused of calling the referee a cheat and using the 'c' word.

"I’ll admit using the 'f' word but I said to him, You have got to be f***ing joking me and I said that a couple of times to him. I never used the 'c' word. I don't use that word and I didn't call him a cheat.

"My mum passed away last week - which is far more important than this - and I don’t need this hassle to be honest. Like I said, the matter was closed but I’ve got a decent reputation in the game and I won’t stand by and be accused of saying something I didn’t and not responding.

"Our media team have got some audio and it backs me up. Some people have said I should have come out straightaway and explained what I said but I didn’t want to do that. I was trying to help Darren. I said the matter was finished and it was but I have to make it clear now that I totally dispute what has been said by the referee."

Drysdale was removed from officiating at two EFL matches in the aftermath of the incident with Judge. He has since missed officiating at a further three fixtures.


popular
We knew Sean O'Brien wouldn't let us down with his Lions XV
Bill Shankly’s grandson asks for statue to be removed from Anfield
'War-scene' in Tyrone dressing room before 2005 final sums up an iconic team
Keith Earls backed for Lions XV by one of the best in the game
'Make him hurt, make him yours' - How the Springboks ruled the world
The SportsJOE 12 o'clock quiz | Day 335
Springboks legend Tendai Mtawawira tells us what he really thinks of Ellis Genge
You may also like
4 hours ago
“Remember what they’ve done to us” - Manchester United fans on another Glazer betrayal
9 hours ago
The humiliation of the arrogant Super League is a moment we should all savour
9 hours ago
Ranking the top 10 signs as football fans stick it to the European Super League
10 hours ago
Man City - the reluctant billionaires who didn't want to be left out of the cool gang
12 hours ago
United's exit statement, with no apology and no hint of regret is an absolute joke
12 hours ago
John W Henry apologises from the heart but Jamie Carragher reckons he has work to do
Next Page