He didn't even make it past the halfway line

An Everton supporter stormed the pitch at Carrow Road in an attempt to confront manager Rafael Benítez after Adam Idah scored to put the Toffees 2-0 down against Norwich City.

The Blues went behind in the 16th minute when centre-back Michael Keane's attempted clearance bounced under the helpless Jordan Pickford.

END_OF_DOCUMENT_TOKEN_TO_BE_REPLACED

Dean Smith's side doubled their lead just two minutes later when Adam Idah converted Brandon Williams' inviting cross. It was the Republic of Ireland forward's first Premier League goal and put his side in a strong position for a rare win.

With Everton heading for their 10th league defeat of the season, one Toffees fan attempted to confront boss Benitez on the touchline as he invaded the pitch and ran towards the Spaniard. 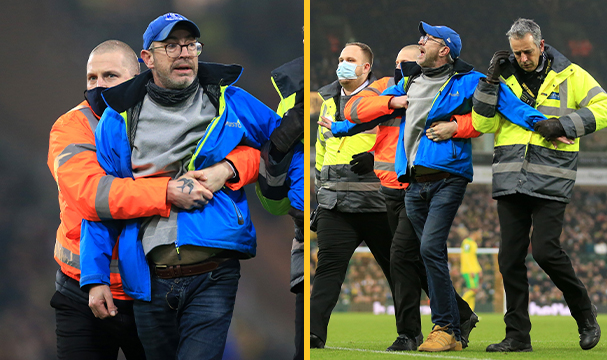 Fan from the away end runs onto the pitch to remonstrate with, it seems, Benitez.
He didn't make it as far as the dugout before stewards stopped him

However, as per Phil Kirkbridge, the supporter didn't make it very far and was quickly surrounded by stewards.

Evertonians FUMING in the away end pic.twitter.com/WEsocOvVp2

END_OF_DOCUMENT_TOKEN_TO_BE_REPLACED

The Toffees have made an awful start to the season, winning just five of their opening 18 Premier League fixtures, with many fans calling for the sacking of former Liverpool boss Benitez.

However, according to the Liverpool Echo, the 61-year-old held 'positive talks' with Farhad Moshiri on Friday.

Benitez reportedly said that a number of items were discussed, including what transfers the club could still do before the end of the window.

The Spaniard believes that he retains the backing of Moshiri who 'knows' how injuries to key players have impacted Everton's positive start to the campaign.

"I will not say it was a meeting," Benitez said.

You may also like
20 hours ago
Liverpool fans convinced that Aston Villa had levelled at Man City in cruel prank
21 hours ago
Roy Keane shows great comic timing after Jack Grealish party invite
1 day ago
Jamie Redknapp reminds Roy Keane of brutal Spurs comments
1 day ago
Spanish TV say Mbappe will 'never be a man' after snubbing Madrid for money
1 day ago
Kylian Mbappe told Perez he was staying at PSG in leaked WhatsApp message
1 day ago
'Paris is my house!' - Kylian Mbappe signs biggest contract in world football
Next Page