A new Serie A rule on shirt colour was announced last year.

AC Milan could be forced to rethink their soon-to-be-released third shirt due to a new rule set to come into effect from the start of the 2022/23 season.

Made by Puma, it combines different shades of camouflage green - including 'Dark Green Moss' as its primary colour and 'Spring Moss' for the club crest and logos.

This choice of colour scheme, however, may fall foul of a new Serie A rule, which prohibits clubs from wearing green. 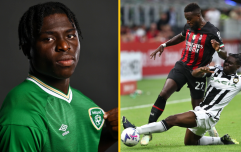 END_OF_DOCUMENT_TOKEN_TO_BE_REPLACED

It was announced last year that the Italian top flight would be banning outfield players from wearing the colour after TV broadcasters raised concerns that the green of the grass would blend with the green of the kits.

The rule only applies to away and third shirts, so teams who traditionally play in green home shirts, like Sassuolo, for example, are not expected to make any changes. Goalkeepers' jerseys are also exempt from the rule and clubs are still permitted to have green on their shirts so long as it is not the dominant colour.

The new regulations were announced a year ago to give clubs and manufacturers ample time to make sure their new shirts fit the criteria.

It remains to be seen if Serie A will take issue with Milan's third shirt design. Although not likely to blend with the green of the grass, the shirt is undoubtedly predominantly of green hue, so could well force AC Milan to change to a different colour.


popular
World Cup 2022 Day 14: All the major action and talking points
Shay Given on how far Ireland could've gone at the 2002 World Cup with Roy Keane in the team
From Ireland to Argentina: Alexis Mac Allister's Irish roots explained
Ronaldo finally reveals why he got that hideous haircut
"Nowadays, even if I don't hit a ball, I don't care as long as we win" - Gleeson learning from the past
The story behind Nate Diaz's backstage scuffle with Clay Guida's team during UFC 199
Argentina reach World Cup last-16 with convincing win over Poland
You may also like
8 months ago
José Mourinho confronts journalist during press conference
10 months ago
Serie A side set to sign St Pat's youngster as Jeff Hendrick reportedly heads for Newcastle exit
10 months ago
Referee faces 'lengthy suspension' after mistake in AC Milan match
10 months ago
Unvaccinated players should have their salaries cut, says Fabio Capello
1 year ago
Jack Wilshere trains with Serie B team in hope of deadline day move
1 year ago
Seven things to watch to quench that football thirst before the new season kicks off
Next Page