The oldest player in World Cup history, Essam El Hadary, made a superb save in the first-half of Egypt's final group game with Saudi Arabia on Monday.

Egypt have never won a game at the World Cup but they could still be in line for a maiden victory at the Volgograd Arena in Volgograd if they can defeat Saudi Arabia. 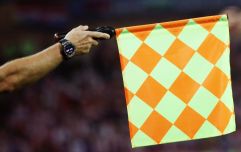 END_OF_DOCUMENT_TOKEN_TO_BE_REPLACED

Fahad Al-Muwallad missed the first penalty after El Hadary dived correctly to get a hand on the ball and push the Levante forward's shot onto the crossbar.

It was a fantastic save from El Hadary, who at the age of 45, makes his finals debut in Volgograd.

45+6mins Ahmed Fathi converts the penalty for Saudi Arabia to level matters on the stroke of half-time.#RTEsoccer

However, the Al-Taawoun goalkeeper could not reproduce his heroics minutes later when Ahmed Fathi sent him the wrong way to score Saudi Arabia's first goal at this year's World Cup.


popular
Get him a tuxedo, give him the All-Star and for crying out loud, someone bring that man out to America
Fans react to Tottenham Hotspur's 'brilliant tease' for Richarlison signing
Southampton pay tribute as Shane Long leaves the club after eight years
Tiernan Kelly and three other players hit with ban following tunnel brawl
Mohamed Salah signs new long-term contract with Liverpool
Former England Under-21 captain open to playing for Ireland
Quiz: Name the players these famous footballers played alongside the most times