Liverpool forward Mohamed Salah moved to the top of the Premier League goalscoring charts on Friday night with his 11th goal of the season against Wolves.

Salah was tied with Arsenal striker Pierre-Emerick Aubameyang heading into the latest round of fixtures with both players locked on 10 goals each but Salah moved one clear of the Gunners forward on Friday with an exquisite finish.

Liverpool midfielder Fabinho took a ball down from James Milner just outside the box before finding winger Sadio Mane sitting out on the wing.

Fabinho passed him the ball before continuing his run towards the goalline where he received the ball back from Mane before cutting it back to Salah for the finish.

It was a very well worked goal from Liverpool with the Premier League leaders looking for their 15th win of the season at the Molineux.

Salah started the season relatively slowly given the ridiculous heights he scaled last term with the Egyptian netting four goals in his first nine matches in the league this season but he has turned a corner recently with seven goals in his last nine league games, including a hat-trick against Bournemouth.

Liverpool manager Jurgen Klopp said earlier this month that he never lost faith in Salah but noted that he is always going to be judged in comparison with his efforts from last season.

"Your basis is a difficult one because always you have to touch on the moment; I'm interested in the moment but I never judge it because the moment is just a little part of all that we have together," said Klopp.

"So I was not one second worried (about Salah). I don't know exactly what people wrote, I have no clue about that.

"But we have to develop always, and to confirm and to improve again on a 41-goal season.

"Everybody would struggle a little, because how can you improve on that?

"If you score in the first five games 10 goals everyone will say 'yeah it's going to happen again'. 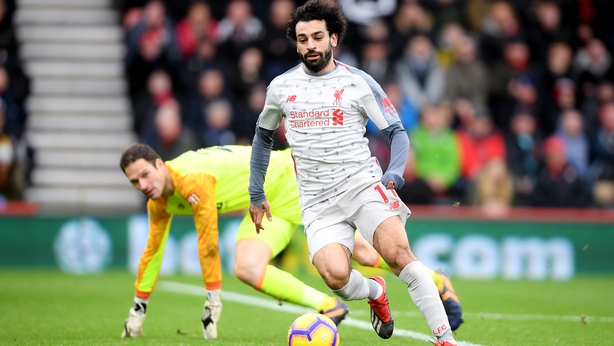 "And we all have to learn to deal with it, and him of course as well. That's how it is.

"He's never had a season like that before, and he wants to have the season again. But you have to make it step by step, so that's what we do.

"So even his first goal (at Bournemouth), I would say is an exceptional finish. How often do you see a situation like that where the guy thinks 'oh, free goal' and then misses.

"So he was really composed, and goals two and three are excellent."