The 17 best wonderkids to sign on FIFA 21 career mode

Fire up the engines, it's time to start a new career mode.

It's October, which means a new FIFA game is out. And that means you'll probably be starting a new career mode as you look to take a mid-ranking side to the summit of the game, winning back-to-back Champions League titles with AFC Wimbledon, Finn Harps, or whoever.

Or maybe you're one of those people who takes over at Manchester City and just acquires the most star-studded squad in the history of the game? Each to their own. I am judging you, though.

END_OF_DOCUMENT_TOKEN_TO_BE_REPLACED

If you're looking to build a young, exciting squad full of potential then you've come to the right place. In no particularly scientific order, these are the top 20 young players with the highest potential to improve on the game that could help you climb to the top of the game on FIFA 21.

Only 18 years old, Chevalier is rated just 61 on FIFA 21 and therefore costs a measly £430k. But if you're starting with a team in the EFL and want a keeper to grow with your team look no further. He has the potential to rise to an 83 rating, the joint biggest growth differential in any young goalkeeper on the game.

Also just 18 years old, Vandervoordt is slightly further along in his development. Currently rated 68, he has the potential to transform into an 87 rated player and costs around £1.4 million. 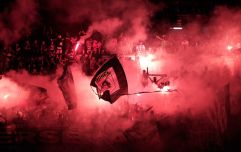 END_OF_DOCUMENT_TOKEN_TO_BE_REPLACED

Already the best Frimpong to ever play football, Celtic's right-back is set for big things. Currently rated 70 on FIFA 21 and priced at £3.2 million, he is an absolute steal considering his potential to develop into an 86 rated player.

There are other right-backs on the game currently rated much higher than Williams - Reece James, Sergino Dest - who will reach the same level, but if you're looking for a bargain, Williams is your man. The 19-year-old Wales international is currently rated just 67 but with the right coaching and playing time, he can reach 85. He also costs just £1.4 million compared to £11.3m you'd be asked to shell out for James.

Arsenal signed Saliba last summer before loaning him back to Saint Étienne so he's not exactly a hidden gem, but he is still reasonably priced on the game at just £9 million (astoundingly unrealistic but there we are.)

He's 19, currently rated 74 and will improve to reach 87. That's good investment if you ask me.

There's not exactly swathes of information about this 17-year-old prodigy, but EA Sports believe he is the real deal. Rated 60, he can supposedly reach an 86 rating, jumping a staggering 26 rating points. He costs just £385k and can play at left-back too. What's not to like?

The 17-year-old German can play at left-back or left midfield, he costs £675k and he is expected to rise from a 63 rating to an 86 rating. What more do you need to know?

More of a left wing-back, for those of you who like a back three system, Sporting CP's 18-year-old is already rated 72 and will rise to 85. One for those of you starting a bit higher up the ladder than League One. He is a bit more expensive than the other players on this list though, valued at £5.4 million.

Your Sandro Tonalis and the like will set you back several million pounds, so if you're looking to find a rough diamond to shape into the next Sergio Busquets, you could do much worse than Kana, currently plying his trade in Belgium.

In real life, Bellingham's next move will be for a nine-figure fee, in all likelihood. But on FIFA 21, despite his recent move to Dortmund, he is only valued at £1.9. million. Already rated 69 at the age of 17 and capable of playing multiple positions, he can reach a rating as high as 88. You'd be stupid not to.

Another 17-year-old German lad, this one. Wirtz is expected to jump from 68 to 88 and costs just £1.6 million. Other number 10s are available, but in terms of value for money, Wirtz is far from the worst.

This Danish 18-year-old has the potential to rise from 67 to 85 on the game and is valued at £1.4 million. He can also play on both wings or up front.

No, not Gedson Fernandes. I know this fella sounds like he's been made up by spinning a wheel of Portuguese names but I assure you, he is real, and he is really good. Just 17 years old, and rated 69 at the moment, the winger can reach a rating as high as 89 on FIFA 21 and can play on both wings. On top of that, he costs just £1.2 million.

Again, nothing you don't already know with this one. The kid has taken the season by storm so far for Barcelona and will be just as much fun on FIFA 21. It's easy to forget the Spain international is just 17 years old. Seventeen! You'll need £13.5 million to take him from Barcelona but he'll probably be the best investment you make on the game, seeing as he will improve from an already decent 76 rating to 90.

Another Dortmund player, another 17-year-old you will probably know a lot about. The American is already a regular starter for the Bundesliga club and is on the path to stardom. EA have recognised his huge potential and enabled him to improve from 68 to 87 on FIFA 21. All that potential for just £1.7 million. He's a manager's dream.

You already know Erling Braut Håland and João Felix are going to be the best forwards in the world and reach well into the 90s on FIFA. Let me tell you about a couple of hidden gems.

You won't be able to sign him immediately, as he is spending the season on loan from Inter at SPAL, but as soon as you can, snap up the Italian 18-year-old for £1.2 million, and take him on a journey from 66 rated promising talent to an all conquering 86 rated goal machine.

Another German - they produce a lot of good players, don't they? - you'll want to snap this 18-year-old up before he gets too high up on the Red Bull ladder. He is projected to improve but 18 rating points, from 69 to 87.

And those are your 17 wonderkids to buy on this FIFA.

Come back in a couple of months when you've won the league to thank me.