"I've great memories of coming here as a kid."

Katie Taylor, has been there, seen that, and got the belt. The undisputed champion is at the very top of the sport but there has been one key thing missing in recent years - the fans.

The Bray native has been fighting in empty venues since the COVID-19 pandemic, but this Saturday night, the crowds finally make a return.

Peter Taylor, the champ's father, grew up in Yorkshire, so where better for the fans to make a return than Leeds?

"This has been a long time coming, the atmosphere's going to be electric. I have a soft heart towards Leeds and it's going to be amazing to fight here.

"I've great memories of coming here as a kid, visiting this city and going to Elland Road for Leeds United games, they're some of my best memories. To have a chance to actually fight here is really special." 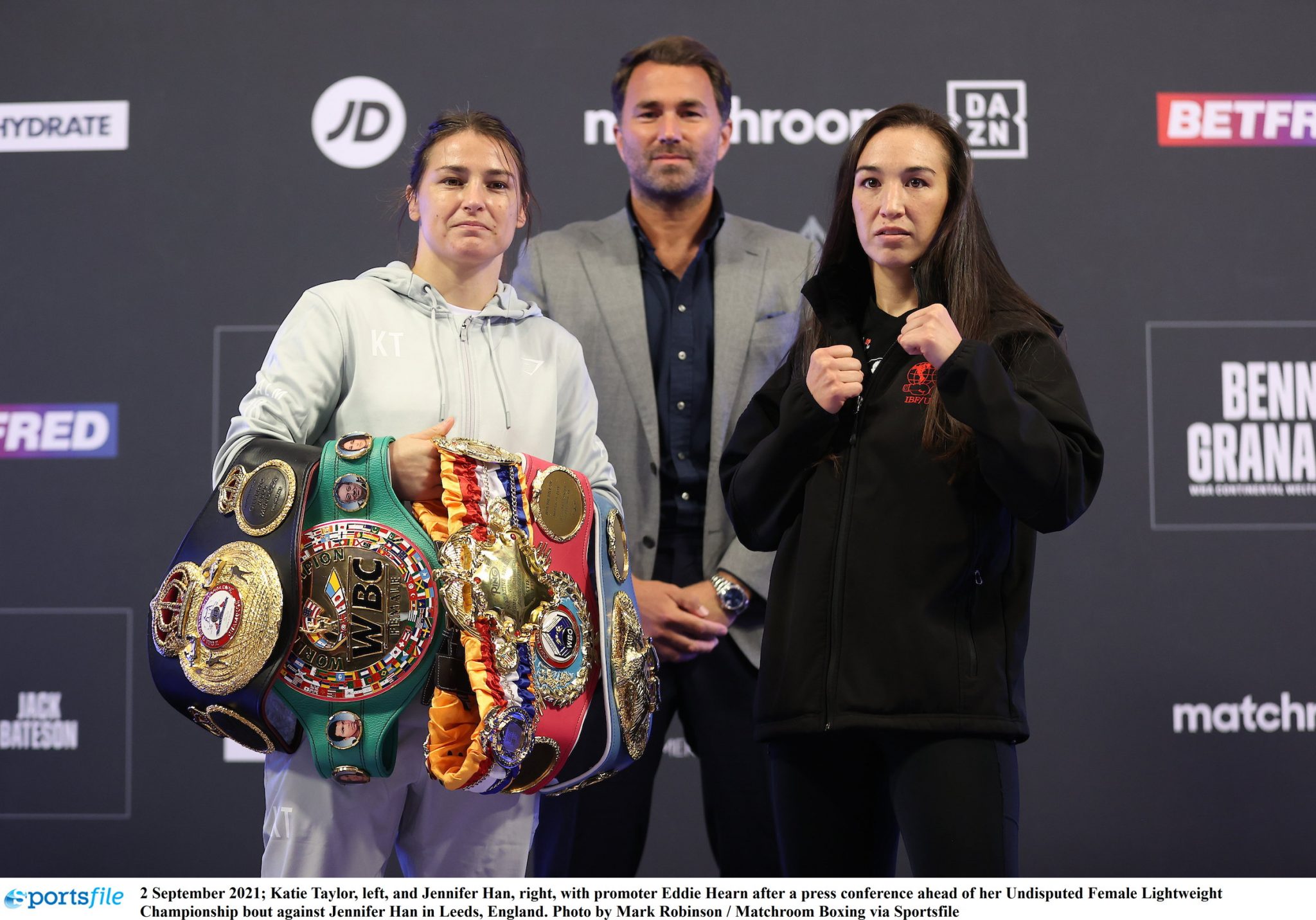 END_OF_DOCUMENT_TOKEN_TO_BE_REPLACED

Many fans are looking at Amanda Serrano as a potential opponent for the Irishwoman, but Taylor insist she isn't overlooking Han.

"She's a very good fighter, a very technical fighter. She had a good amateur career as well.

"I don't tend to watch a lot of my opponents to be honest. I leave that stuff up to my coach and watch a few clips every now and then [but] I know that she's technically very good.

"I think she's going to bring her A-game on Saturday night, that's usually the case when they step into the ring against myself so I'm expecting a very tough fight."

Looking ahead to a potential showdown with Amanda Serrano, the undisputed champion is unsure about when or if that fight will take place.

"I don't know when that fight is going to be made," Taylor said in response.

"The fight hasn't happened not because of me, I obviously want the big names and the big fights so I guess the ball is in her court.

"I have a great team of people around me and their responsibility is to make those fights happen, I'm just here to focus on my fights and my training.

"Thankfully I've been involved in some of the biggest fights in women's boxing and I don't think we've ever ducked any opponent.

"You have all seen who I've fought in the past. We want the big fights, the history making fights and I think me and my team have done a great job of that."


popular
"It’s hard not to respect Johnny, even if you don’t like him!" - Dan Biggar
Martin McHugh: Them lads were stronger than the modern day player who's lifting weights all the time and doing no manual work
Dessie Farrell set to cut large chunk of Dublin players as panel is reduced for league campaign
"I was in the Blackrock end goal looking up to the heavens saying, "Get us through it" - Kerins following his late father's footsteps
Quiz: Which footballer has played more times for Ireland?
20 of the most expensive January transfer signings in Premier League history rated
Sky Sports presenter explains why Roy Keane and Graeme Souness are so critical of players
You may also like
3 weeks ago
Jake Paul taunts Floyd Mayweather with New Year's resolutions list
1 month ago
12 sports documentaries you must watch this Christmas
1 month ago
Amanda Serrano's last opponent unrecognisable after 236-punch barrage
1 month ago
Jake Paul spot-on with women's boxing comments as he plots Taylor vs. Serrano
1 month ago
Jake Paul calls out Jorge Masvidal and Nate Diaz after knockout win over Tyron Woodley
1 month ago
Fans brand Paul vs Woodley fight 'rigged' after footage of 'hand twist' gesture
Next Page