Tony Bellew's wife insists she was provoked after footage emerged of her shouting derogatory comments at an employee at the Manchester Arena on Saturday night.

Moments after Bellew's devastating knockout defeat to Oleksandr Usyk in what proved to be the Liverpudlian's final bout, his wife Rachael Roberts engaged in a furious exchange with an arena worker.

"They are f**king crying right now you f***ing q***r - dirty f**king f*g," Roberts shouted as she exited an elevator, allegedly aiming the tirade at a member of the venue's bar staff. 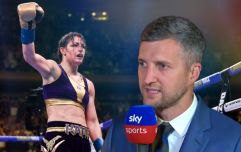 END_OF_DOCUMENT_TOKEN_TO_BE_REPLACED

The Mirror reports that the worker in question was unaware that Bellew's wife was in the lift when the man who filmed the incident asked aloud whether the fight was over and after being told that it was, his colleague said: "Thank God for that."

That is reportedly what resulted in the irate response from Roberts, who claimed that the employee had made her children cry.

The employee, who asked not to be named, said: "Her actions were completely out of order for the wife of a celebrity boxer.

"What I asked was not meant to take offence and it was simply a question about the match.

"After we found out that Tony lost the fight, I thought she was using the anger of Tony's loss and directing it at us."

While neither Bellew nor Roberts will be making an official statement on the matter, a spokesperson for the couple told the Daily Star that Roberts "was provoked by a male member of staff who said 'I'm pleased Tony got knocked the f*** out' causing the reaction shown. Rachael is in no way homophobic."