The ticket prices for Mayweather v Pacquiao are mind boggling

Well, that $250 million purse isn't going to fund itself.

The ticket prices for the long awaited fight between Manny Pacquiao and Floyd Mayweather may make your eyes water.

The pair will meet at the MGM Grand Arena on May 2 in what looks set to be the highest grossing single sports event in history, and that's certainly reflected in the prices.

The cheapest tickets, for the seats furthest from the ring, are $4,960. While ringside seats will set you back $25,025, which is almost twenty-two thousand euro. 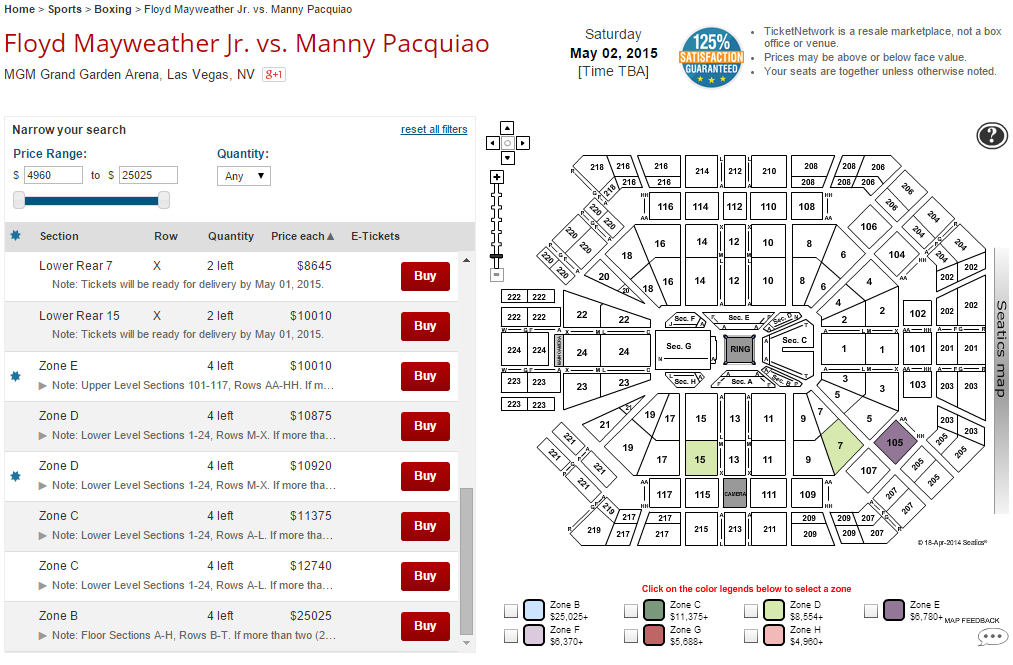 American fight fans also could be charged up $100 to watch the bout on pay-per-view, which suddenly doesn't seem so expensive compared to prices to attend the event.

It was revealed earlier that a computer glitch was responsible for reports that the MGM Grand hotel was sold out within 15 minutes of the fight's announcement. There are still rooms currently available, but they'll set you back $615.

Ever wonder why Mayweather's nickname is 'Money'? Wonder no more.


popular
The Garry Ringrose narrative around the Lions Tour is complete bull
"Sadly at this point in time, it's Johnny" - Why Sexton missed Lions spot
'Jesus Christ! How am I going to put up with this lad for nine weeks?!'
You'd swear the world was ending as Spanish tv host goes after Eden Hazard
The SportsJOE 12 o'clock quiz | Day 346
Major shocks as Warren Gatland announces 2021 Lions squad
Lions XV that should start the First Test against South Africa
You may also like
2 years ago
Manny Pacquiao agrees mystery deal with MMA promotion that paid Mayweather $9 million
2 years ago
A reminder of how many times Floyd Mayweather "retired" from boxing
2 years ago
Floyd Mayweather has $80 million in exhibition offers on the table
2 years ago
Eddie Hearn expects Mayweather vs Pacquiao rematch to be announced this weekend
2 years ago
Conor McGregor demands mixed martial arts exhibition bout against Tenshin Nasukawa
2 years ago
Floyd Mayweather barely trained ahead of exhibition bout in Japan
Next Page