What fight was that judge watching?

All that matters is that Ryan Burnett is indeed the new IBF bantamweight champion, having coasted to victory over Lee Haskins in Belfast on Saturday night.

But it could have been so different for the undefeated Belfast bantamweight because of some judging incompetence from Clark Sammartino at the Odyssey Arena.

Burnett thought he had nothing to worry about once the final bell rang, as he'd clearly dominated in a fight that saw Haskins dropped on two occasions.

The 25-year-old was celebrating before the judges' scorecards were read out and he had every right to because the decision was never in doubt. 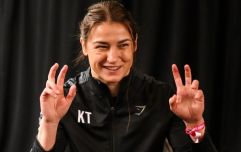 END_OF_DOCUMENT_TOKEN_TO_BE_REPLACED

But we imagine he got a pang of panic once he heard that one judge had given Haskins a 118-108 decision.

The two other judges in attendance were paying attention, thankfully, and registered 119-107 scores for Burnett and he released an understandable sigh of relief as his hand was raised.

It was a hairy moment for Burnett's camp but at least the split decision went in his favour because if another of the three judges had been having an off night, it might have had dire implications on the youngster's professional career.

But justice prevailed and, after the fight, promoter Eddie Hearn revealed what led to the bizarre and concerning mix-up.

"Frighteningly, the judge scored... he must have thought that Haskins was Burnett and Burnett was Haskins," Hearn told IFL TV.

"I mean, this is scary. He apparently asked one of the photographers which one was Lee Haskins after round one or two.

"And then, I thought it was just bad scoring but I looked at the card and he scored two 10-8 rounds for Haskins.

"To have your career put in the hands of someone like that... He's an old judge and I don't want to be disrespectful. He's been around a long time."

"But there's a lot at stake here," Hearn cntinued. "People's lives are at stake, their livelihoods, their future.

"When I got in the ring and heard it was a split decision - and normally everybody moans because it's the other way around.

"But I believe, I'm 100 per cent positive that he's just put the scores in the wrong boxes."


popular
Cutting through the contradictions from one of the worst television segments of the year
'ROG isn't that sort of guy' - Brian O'Driscoll on first Ronan O'Gara encounters
Erik ten Hag orders full report on every Man United player ahead of pre-season
Aiden McGeady details the abuse he suffered after playing for Ireland instead of Scotland
Pitch-side microphone picks up Eric Dier joke about Mo Salah
Noel Gallagher left 'covered in blood' after headbutt from Ruben Dias’ dad
Roy Keane shows great comic timing after Jack Grealish party invite
You may also like
4 weeks ago
Eddie Hearn hints at Katie Taylor v Amanda Serrano rematch in Ireland
2 months ago
Oleksandr Usyk leaves Ukraine to prepare for the Anthony Joshua rematch
3 months ago
Jake Paul issues passionate rallying call for women's boxing at Taylor vs. Serrano showdown
3 months ago
"It’s by far the biggest female fight of all time" - Katie Taylor vs Amanda Serrano officially announced
5 months ago
Eddie Hearn reveals that Jake Paul could play a huge role in making Katie Taylor vs Amanda Serrano happen
5 months ago
“That’s a bit worrying" - Eddie Hearn has some concerns about Katie Taylor's upcoming fight
Next Page