It's been the "toughest fight of his life".

But brave boxer Nick Blackwell admits he couldn't have come through it without the support from thousands of fans.

The 25-year-old has spoken publicly for the first time since he suffered a bleed on the skull after his middleweight title defeat to Chris Eubank Jr.

The former British champion had to be put in the coma by doctors to examine the extent of his injury following the loss to Eubank Jr at Wembley Arena.

END_OF_DOCUMENT_TOKEN_TO_BE_REPLACED

A photo of the Trowbridge fighter sat up smiling in hospital was a welcome sight for the friends, family and boxing fans around the world.

But now he has posted a message on the Facebook account of his brother Daniel which thanks everyone for their support and good wishes through it all.

He wrote: “Just want to say a massive thank you to everyone who has been there for me, all my friends and family, those who wished me well and those who raised money for me.

“I feel truly blessed and have massive love for you all. I couldn’t have done it without you.

“It’s been the toughest fight of my life and you all have made it that bit easier.

END_OF_DOCUMENT_TOKEN_TO_BE_REPLACED

“On to rehab now, progress is getting better by the day. Big love to you all, Nick.”

He kept coming despite a brutal barrage of blows from the son of legendary middleweight world champion Chris Eubank.

The fight was stopped in the 10th round by the ringside doctor because of severe swelling above the eye of Blackwell. 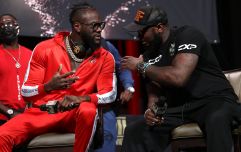 END_OF_DOCUMENT_TOKEN_TO_BE_REPLACED

His condition deteriorated after the fight ended and he was taken out of the ring with an oxygen mask on a stretcher.

He was then put in an induced coma to assess the severity of the bleed on his skull.

Eubank Jr and his father have since spoken about how they had fears for Blackwell's health earlier in the fight.

Eubank Sr, who is coach and mentor to his son, was filmed telling him not to keep hitting Blackwell to the head, but go for his body instead to avoid inflicting more damage on him.