He's had to wait three years but there's an old saying about the correct temperature at which to serve a dish called revenge.

Michael Conlan has waited patiently for his chance to exact vengeance on the last man to beat him.

Conlan has gone undefeated since his decision to move into the professional realm, a decision which was prompted by his controversial defeat to Vladimir Nikitin in the quarter-finals of the Rio 2016 Olympics.

END_OF_DOCUMENT_TOKEN_TO_BE_REPLACED

"Amateur boxing stinks, from the core right to the top," Conlan proclaimed after showing his middle fingers to the judges in charge of the fight to express what he thought of the decision.

Top Rank promoter Bob Arum was quick to pounce on one of boxing's most promising prospect's desire to abandon the amateur game and Conlan has since gone 11-0 as a professional, claiming and defending the WBO Inter-Continental featherweight title in the process.

But while he finds himself edging into world title contention, Conlan has a score to settle in the form of the Nikitin controversy.

On Tuesday, it was announced that Michael Conlan's rematch with Nikitin will take place in Belfast on August 3 in the professional ranks.

The Belfast fighter explained how it's "probably going to be the first fight that I'll be able to get up for as it's the only fight I wanted since then" ahead of his opportunity to claim revenge, which will take place as part of the Féile an Phobail festival in his home city. 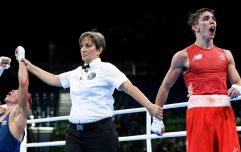 END_OF_DOCUMENT_TOKEN_TO_BE_REPLACED

"We signed Nikitin to a contract after we signed Michael with the idea that one day we would match them in a fair and square contest with no political implications," said promoter, Bob Arum.

"Vladamir Nikitin is a nice young man. You can't really blame him for the unfair result, he had nothing to do with it. It was the judges who were dictated to."


popular
WATCH: Paul O'Connell proves for the umpteenth time that he's not like us mere mortals
Kieran Donaghy set to break 30-year-old club record this weekend
Shane Walsh: 'That's not how I was coached to play football. No one was coached to play football that way'
"He's one of the best athletes, if not THE best athlete I've seen in the last while"
Sean O'Brien shares some of the worst player forfeits from his Leinster days
Study shows GAA players more prone to binge drinking than their peers
Danny Mills forgets he's on air as he calls Man Utd 's***' on Sky Sports
You may also like
4 weeks ago
Boxing investigation finds at least seven suspicious results at Rio Olympics
2 months ago
Michael Conlan's electrifying ring walk to Irish ballad will give you chills
2 months ago
Tyrone McKenna reveals what two things Irish people are good at in hilarious post-fight interview
2 months ago
Michael Conlan reveals his ring walk song for tonight's homecoming fight in Belfast
2 months ago
Michael Conlan dreams of fighting for a world title at GAA stadium
5 months ago
Michael Conlan gets the win but had reason to "worry" when the scorecards were read out
Next Page