There will be a considerable size difference between both fighters.

The weight cut is well underway for Conor McGregor as his professional boxing debut against none other than Floyd Mayweather Jr. draws near.

Just over a month ago and 'The Notorious' was in the shape of his life. He showed up to the Brooklyn leg of the Mayweather vs. McGregor promotional world tour topless, save an over-the-shoulder mink that cost $40,000. 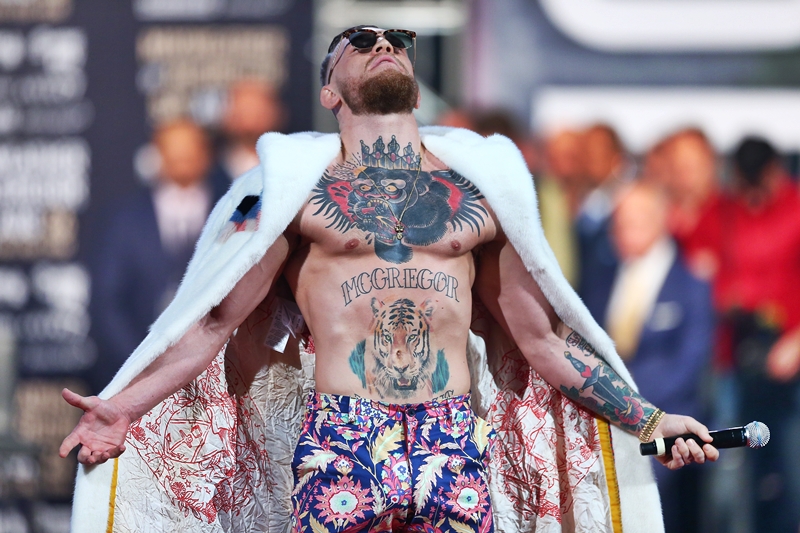 McGregor's walking around weight is considerably higher than the 154lbs he will weigh in at later this week, ahead of Saturday's fight against Mayweather in Las Vegas. In a recent interview to preview the fight, the Dubliner described himself as a '170-pound Irish gorilla'.

One week later and he was in fearsome nick.

Sparring today. The shorts are Gucci.

At present, as the weight cut nears, McGregor is a shadow of the man that strutted around the Barclays Center [sic] on July 13.

Full of Irish horse power I am going to run you over. pic.twitter.com/NtaczPEnVM

The face is drawn and McGregor's body has lost some of the bulk and definition.

Following the Friday weigh-in at the T-Mobile Arena, McGregor will do what he has done for his past nine years as an MMA fighter - put the weight straight back on.

John Kavanagh, his coach, has told The MMA Hour that McGregor could gain as much as 14 pounds [one stone] over the 24 hours after he takes to the scales. He said:

Given that Mayweather could be weighing around 152lbs for the fight, McGregor will have a considerable weight advantage on the night. Only time will tell whether on not that will play a significant role in how the fight plays out.


popular
Felipe Contepomi believes Leinster don't need to shop abroad
QUIZ: Name every player that's scored three or more Premier League hat-tricks
The SportsJOE 12 o'clock quiz | Day 109
"Some of the guys have put a lot into it" - Felipe Contepomi confident Leinster can start fast
QUIZ: Name the country these football teams play in
'ROG was the kingpin... he just wanted to win, win, win' - Barry Murphy
SportsJOE 2000s Football Quiz | Round 9
You may also like
1 month ago
Dana White faces more retirement questions after Garbrandt and Nunes victories
1 month ago
Justin Gaethje tells Conor McGregor to wait his turn
1 month ago
McGregor the fighter just couldn't help himself
1 month ago
"I'll go to Ireland; do what I gotta do" - Gaethje has plans for McGregor after title fight
2 months ago
"Donald showed up; Cowboy wasn't there. The wrong guy showed up"
2 months ago
"There's never been a rivalry as poisonous. It's an evil kind of buzz"
Next Page