Ryan Burnett left the ring screaming in agony after suffering the first defeat of his professional career.

What appeared to be a serious back injury midway through the fourth round of his World Boxing Super Series bantamweight quarter-final cost Belfast's Burnett his WBA title against Nonito Donaire on Saturday night.

Burnett clutched his back after overextending on a right hand and immediately took a knee. 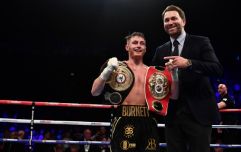 END_OF_DOCUMENT_TOKEN_TO_BE_REPLACED

Somehow, the 26-year-old managed to see the round out but once the adrenaline wore off, the pain became too much for Burnett in his corner and he failed to make it off his stool for the fifth.

Medics quickly tended to Burnett, who required oxygen and was taken out of the ring on a stretcher in some discomfort.

Ryan Burnett retires on his stool after the 4th round with what seems to be a back injury. Sad to see him loose like that’ Get well soon Champ #BurnettDonaire #WBSS2 🏆 pic.twitter.com/gnouvEbBKA

Burnett had impressed early on in what was a fiercely competitive bout at Glasgow's SSE Hydro Arena and the extent of his injury remains to be seen.

Donaire sent his opponent a classy message after the bout, wishing Burnett a speedy recovery.

First off, I want to acknowledge and thank God and my Archangels for everything they put before me tonight. 🙏 Next I would like to send prayers of healing to Ryan Burnett and thank him for sharing the ring with me. I know he'll heal up and be back in the ring soon! pic.twitter.com/cJoOulLnVW 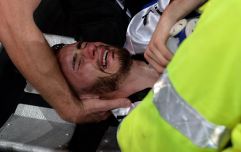 END_OF_DOCUMENT_TOKEN_TO_BE_REPLACED

It was not the way that Donaire would have wanted to win and ever the sportsman, he made a point of checking on Burnett immediately after the referee waved the bout off.


popular
Andy Moran reveals which former Mayo teammate was the ultimate team player
Paul Galvin is not one bit impressed with the new Kerry jersey
"It’s hard not to respect Johnny, even if you don’t like him!" - Dan Biggar
QUIZ: Which is the correct GAA crest?
Six GAA games shown on TV this weekend that you do not want to miss
Craig Dias on club All-Ireland run, winning Leinster, and making his second debut for Dublin a decade after his first
"I was in the Blackrock end goal looking up to the heavens saying, "Get us through it" - Kerins following his late father's footsteps
You may also like
3 years ago
Ryan Burnett to defend WBA title against Yonfrez Parejo on Anthony Joshua v Joseph Parker undercard
4 years ago
The 10 greatest Irish sporting moments of 2017
4 years ago
Boxing chief is coming down hard on judge who ballsed up Burnett-Haskins scorecard
4 years ago
Judging controversy scares Eddie Hearn as Belfast's Ryan Burnett becomes world champion
3 months ago
New footage shows exactly what Deontay Wilder said to Tyson Fury after trilogy fight
3 months ago
Deontay Wilder's trainer reveals why Wilder refused to show respect to Fury after defeat
Next Page