As Floyd Mayweather zeroed in on a flagging Conor McGregor, Sky Sports commentator Carl Froch declared 'Money' could end the fight 'whenever he chooses to'.

As the fight entered the final rounds, Mayweather upped the ante and started to land big blows. He pushed for the victory and he got it.

Following his TKO victory, in the 10th round, Mayweather told ESPN's Sal Paolantonio that he was merely waiting for McGregor to 'shoot his load' before going for the kill.

Floyd Mayweather and Sal Paolantonio have a pleasant discussion about Conor McGregor shooting his load. pic.twitter.com/VGqaJzyqU2

ESPN also learned that Mayweather was so confident of finishing the fight inside 10 rounds that he placed a hefty bet on himself to get the job done. He instructed his team to lump on $100,000 at odds of -200 [or 2/1 ON]. He commented:

"I have to make sure he bet because earlier today I went to the sports book to bet and they wouldn't let me bet."

END_OF_DOCUMENT_TOKEN_TO_BE_REPLACED

It has been reported that Mayweather personally sought to bet $400,000 on the same outcome, at the M Resort, at 3:30pm on Saturday afternoon [Las Vegas time] but he was refused. Fighters are allowed place bets on themselves to win, in Vegas, but not on any specific markets like rounds of manner of victory. 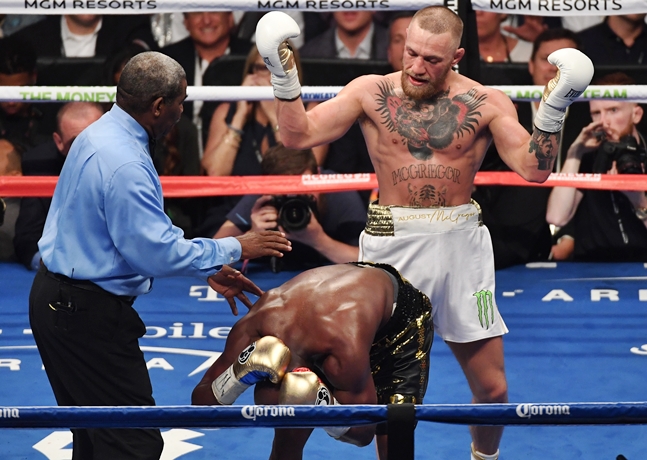 Don't feel too sorry for him, he is still set to clear $250m for the fight.


popular
Can you name every English football club that begins with 'W'?
The SportsJOE 12 o'clock quiz | Day 106
QUIZ: Name the country these football teams play in
"Luis Suarez made a big mistake and we, as a club, got it wrong" - Jamie Carragher
Jack Grealish reveals the reason he wears his socks like a GAA player
How Connacht could line up after summer of massive change
The SportsJOE 12 o'clock quiz | Day 105
You may also like
4 weeks ago
Dana White faces more retirement questions after Garbrandt and Nunes victories
1 month ago
Justin Gaethje tells Conor McGregor to wait his turn
1 month ago
McGregor the fighter just couldn't help himself
1 month ago
"I'll go to Ireland; do what I gotta do" - Gaethje has plans for McGregor after title fight
2 months ago
"Donald showed up; Cowboy wasn't there. The wrong guy showed up"
2 months ago
"There's never been a rivalry as poisonous. It's an evil kind of buzz"
Next Page