Eddie Hearn has reminded Amanda Serrano that she has agreed to fight Katie Taylor and warned her not to back out of the deal.

Comments from Serrano in recent weeks have concerned Taylor's team as the division-hopping Serrano has suggested that she may not end up fighting Taylor later this year after all.

"I doubt it will. I have a bunch of things going on," Serrano tweeted a fan when asked if she believed that the Taylor fight would happen before 2019 is out. "They are only interested in what they want, how they want it. Girls are getting frustrated and moving on. I have some huge money sponsors so unlike others, I’m good."

While Taylor is currently preparing for her chance to become undisputed lightweight champion with a clash against WBC queen Delfine Persoon on June 1, one of the her subsequent goals is a meeting with Serrano.

The show must go on https://t.co/EUH4UBuGpt

Matchroom boss Eddie Hearn has warned Serrano, whose older sister Cindy was beaten via unanimous decision by Taylor last year, that she has already signed a deal to fight the Bray boxer.

END_OF_DOCUMENT_TOKEN_TO_BE_REPLACED

"I mean, we have an agreement in place," Hearn told iFL TV.

"Amanda Serrano and Lou DiBella, the promoter, have signed a contract to fight Katie Taylor.

"So we’ve got to get that clarified because the reason I’m giving Serrano fights is because she’s signed to fight Katie Taylor. So I want to make sure there’s no wriggle move. 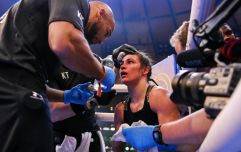 END_OF_DOCUMENT_TOKEN_TO_BE_REPLACED

"We’ve got to give [Serrano] another fight - maybe on the Golovkin card [on 8 June]. And then, fighting Katie Taylor - that’s what we want.

"Our plan for the year has always been [Rose] Volante, [Delfine] Persoon and Serrano. That’s a big year. Champion, champion, mega-fight."


popular
Noel Gallagher left 'covered in blood' after headbutt from Ruben Dias’ dad
Cutting through the contradictions from one of the worst television segments of the year
Aiden McGeady details the abuse he suffered after playing for Ireland instead of Scotland
Roy Keane shows great comic timing after Jack Grealish party invite
BBC apologise after accidentally posting mocking Man United message live on TV
The FootballJOE Pub Quiz: Week 38
France the sore losers as Ireland Men reach first ever Sevens World Series final
You may also like
3 weeks ago
Jessica McCaskill tries her best to talk herself into a Katie Taylor rematch
3 weeks ago
Claressa Shields addresses a potential Katie Taylor super fight
3 weeks ago
Conor McGregor and Jake Paul involved in heated Twitter exchange after Katie Taylor fight
3 weeks ago
"I hope she walks away" - Tony Bellew urges Katie Taylor to go out on top
3 weeks ago
The atmosphere at Madison Square Garden was so loud that the referee couldn't even hear the bell
3 weeks ago
Why Katie Taylor chose not to sit down in-between rounds and why it almost backfired
Next Page