Could this be the reason why Conor McGregor v Paulie Malignaggi sparring footage has yet to surface?

If you thought the Conor McGregor v Paulie Malignaggi beef had become cripplingly repetitive, you may not like what might come next.

When Conor McGregor announced to the world that he would be working with Paulie Malignaggi ahead of his professional boxing debut against Floyd Mayweather, a few eyebrows were raised.

As a former two-weight world champion, Malignaggi was obviously qualified for the gig. However, it wasn't thought that two warriors could work together. This theory was supported by the manner in which McGregor confirmed he had enlisted the help of the retired pugilist.

What Malignaggi had been saying was that he could, 'beat him up with one hand tied behind his back'.

Who wants to see him go through that again? https://t.co/LSRprYdV4H

The breakdown of their relationship began after a supposed leak from the McGregor camp caused Malignaggi to quit. Then the sparring footage emerged showing Malignaggi struggling against 'the Notorious.'

However, these clips were just a few seconds of 20 rounds of sparring, so there's no way of proving they accurately represented how the sessions played out. Even though Dana White said he would have 'no problem' releasing the full unedited footage, it's been over a month since 'the Money Fight' and there has been no sign of it.

This is despite Malignaggi's constant requests for Team McGregor to release the tape falling on deaf ears.

The only way to remove all doubt https://t.co/eB5zE1s92Z 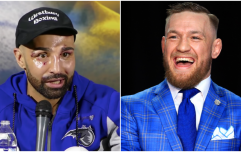 END_OF_DOCUMENT_TOKEN_TO_BE_REPLACED

Joe Cortez, the Hall of Fame referee brought in to give McGregor a lesson in the rules of boxing may have let the cat out of the bag to Helen Yee Sports. You would be forgiven for thinking Cortez was a promoter as he admitted he would 'really push' for McGregor and Malignaggi to settle their differences inside the ring.

"I think it would bring a lot of attention to the boxing fans and to the MMA fans to see what really went on in sparring in the gym that day. I guarantee you, that fight should happen. It was very competitive. I know for a fact it would make a good fight, a much better fight than Mayweather." 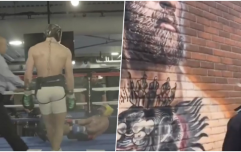 END_OF_DOCUMENT_TOKEN_TO_BE_REPLACED

Perhaps the tape is being sat on in case they need to bust it out as a promotional tool for a potential dual with Malignaggi. Or maybe the clips were cleverly edited to make McGregor look better, as Malignaggi claimed.

Fortunately, it appears as though his next move will be a return to the Octagon.


popular
"I remember someone saying, 'This guy's the best of the lot of them. Just wait for him'" - Brian O'Driscoll
"I trained with a guy that was born in 2004 the other day. We reckoned Earlsie could be his father!" - Peter O'Mahony
Nigel Owens on most annoying players to referee (three of them are Irish)
Six All Blacks but no Ireland players in world's top 20 list headed by Antoine Dupont
The story of the GAA's greatest ever minor
"I asked one question and lads slagged the arse off me!" - Johnny Sexton on Roy Keane chat
Cork GAA will have fight on its hands to hang onto top prospect
You may also like
2 weeks ago
Conor McGregor pays tribute to Solskjaer after Man United dismissal
1 month ago
Conor McGregor posts emotional 5-minute voice message to Ian Garry after UFC debut win
1 month ago
"The Irish are back, baby!" - Ian Garry pays tribute to McGregor after UFC victory
1 month ago
José Mourinho swaps Conor McGregor a Roma jersey for some whiskey
2 months ago
Conor McGregor nearly hits Chicago Cubs fan with wild first pitch at Wrigley Field
4 months ago
What are the dark circles on swimmers backs at Tokyo Olympics?
Next Page