"The next instruction I gave her was, 'No doubles! Just pints, beers, singles and let's see how long this goes'."

Carl Frampton would have understandably had second thoughts about covering the bar tab after this wild night in Belfast.

On the latest episode of TKO, author and journalist Donald McRae joined Frampton and host Chris Lloyd to talk about his new book - In Sunshine or in Shadow: How Boxing Brought Hope in the Troubles.

During their wide-ranging chat, 'The Jackal' touched upon his own experiences as a protestant married to a catholic in Northern Ireland.

"I feel like I'm lucky, doing what I do," he says, "to have been born in Belfast. That's because of the support I get from both sides. I'm a protestant guy married to a catholic and I don't really nail my colours to the mast.

"I treat each man and woman how I'd like to be treated myself, and that is what helps to make me so popular. Both communities get behind me.

"I might not sound like much, but I could sit in a loyalist pub on the Shankill Road or Tiger's Bay or Rathcoole, but I would equally feel at ease sitting in a Republican pub on The Falls Road or in Anderstown. And I've done it, I've sat in both and people have been okay." 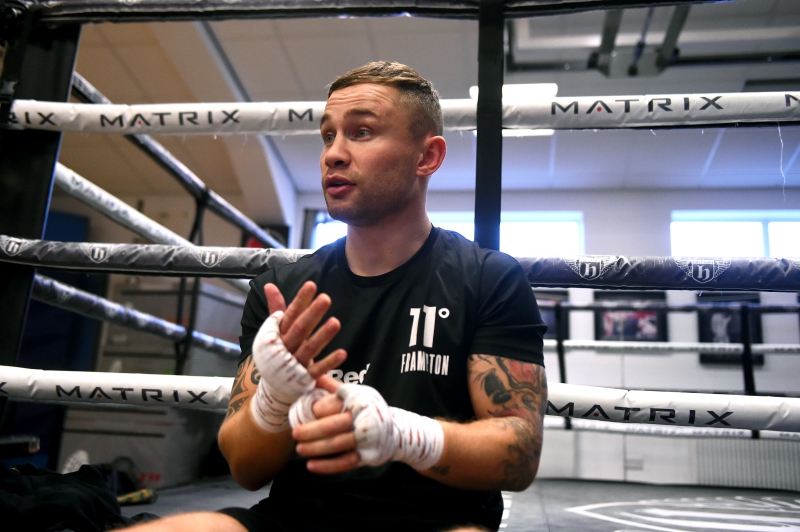 Carl Frampton believes that Belfast is the best boxing city in the world and possesses the most passionate, knowledgeable fans per head of population of any other city in the world. The sport, he feels, also played a huge role in giving hope and purpose during The Troubles.

END_OF_DOCUMENT_TOKEN_TO_BE_REPLACED

McRae lightened the tone when he recalled a night in 2016 not long after he had defeated Leo Santa Cruz to win the WBA (Super) featherweight title. Some 1,500 fans from across Ireland travelled to New York to watch the bout and Frampton invited them al to celebrate with him in the pub, the following day. A good chunk of that number showed up at the bar.

MCRAE: You gave me your [bank] card and said, 'Look after my card and give it to the woman behind the bar'. I was think, 'Carl!' and you had a hefty bill that day.

FRAMPTON: The thing is, I wanted to do it because people were coming to support me and it costed a lot of money. And I got pretty well paid for the fight, so I wanted... I remember saying, well I won't say the [exact] amount, but I put an amount on the card and said, 'Until that is finished, don't come back to me'. And she came back inside of 40 minutes, I was like, 'What?!'

LLOYD: Donald is in the corner with four bottles of champagne and lobster.

FRAMPTON: The next instruction I gave her was, 'No doubles! Just pints, beers, singles and let's see how long this goes'.

That day, which bled into a great night, McRae can remember chatting to boxing fans from the catholic and protestant communities, and how little those perceived divisions mattered when they were united behind a fighter; a sporting cause.

CHECK OUT THE FULL SHOW HERE:


popular
We might finally get to see Lionel Messi and Cristiano Ronaldo playing on the same team
David Clifford passes into Croke Park legend as breathtaking late show steals Hogan Cup glory for St. Brendan's
The SportsJOE 12 o'clock quiz | Day 11
QUIZ: Can you name the Football Italia cult heroes?
Can you guess these Irish rugby players solely from their nicknames?
The top 10 fastest knockouts in UFC history
Ian Keatley - Finding Nemo and finding perspective
You may also like
7 months ago
Joe Ward: If I don't become a world champion I feel like I'll have underachieved
8 months ago
Katie Taylor's next three fights include Delfine Persoon rematch
8 months ago
Dubliner Luke Keeler earns shot at world title eliminator
9 months ago
Grainne Walsh wins bronze at European Games after split decision
9 months ago
Carl Frampton on how much a boxer's fight purse is actually worth
9 months ago
Conor McGregor's take on Paulie Malignaggi loss was remarkably measured
Next Page