We're no detectives but we sense there could be an awful lot more to this story than meets the eye.

Boxing fans and Irish sports fan in general were hugely saddened this morning to find out that Billy Walsh had tendered his resignation with the IABA.

The long serving coach had failed to come to an agreement with the boxing organisation for the retention of his services, and he is heading to America on Thursday to try and finalise a deal to work with the USA women's boxing team. 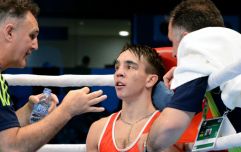 END_OF_DOCUMENT_TOKEN_TO_BE_REPLACED

There has been long rumours of Walsh's apparent breakdown in his relationship with the IABA, and speaking on tonight's Off The Ball he confirmed that he has been unhappy for a long time.

The Wexford man, who has been part of various Irish boxing successes over the last two decades, explained that he would loved to have stayed working in Ireland, but there was too many factors preventing him for doing so,

"When the contract was offered, if I'd have stepped left or right I was probably going to get the bullet  anyway so it's better to leave on your own terms."

"The financial terms were grand but then the non-financial part of it was unacceptable to me. That's why we don't have agreement.

Walsh then hinted that there may have been  a power battle within the IABA that could have led to his resignation, with the coach intimating that he was seeking more control over matters that he felt concerned about,

"I just want to be able to do the job. This has been dismantled along the way in my view and I wanted that control back so that we could drive this team forward heading towards Rio."

"The last year and a half it started to be dismantled and people being taken out of your office."

Listening to Off the Ball. Billy Walsh sounds gutted over his treatment. My gut says this is salvageable depending on IABA will. 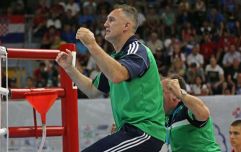 END_OF_DOCUMENT_TOKEN_TO_BE_REPLACED

Walsh also revealed he's heading to America later this week to try and thrash out a new deal which could see him training boxers to fight Katie Taylor at next year's Olympic games.

The Wexford man admits it would be a horrible feeling to be plotting against the Bray woman.

"That would be a nightmare yeah. But you have to move on and if you work for someone else then you work in a different country then that's your country and that's your team. That team will be my team by the time they get to know me."

“The IABA is deeply disappointed not to retain his valued services, and for the avoidance of any doubt, the IABA has done its utmost to retain Billy Walsh as Head Coach. However, Billy himself has made the decision to resign and take up a position with USA Boxing, and we wish him every success with this.”

“Billy has been part of a team within the High Performance Unit since its inception in 2003. We would like to thank him for the tremendous hard work and dedication he has brought to the role and acknowledge his contribution to the great success of the Unit and its boxers."


popular
World Cup 2022 Day Ten: All the major action and talking points
Iran demand action by FIFA after USA team change flag on social media
World Cup 2022 Day Nine: All the major action and talking points
"I appreciate Moycullen now more than ever" - Cooke's American lifestyle from a Moycullen base
For Ballyea, this journey all started out in a purple Toyota Corolla
Roy Keane's issue with Argentina star could rival Graeme Souness and Paul Pogba
"I have equal love for football and hurling" - Sheehy set for two Leinster finals in two hours
You may also like
7 years ago
"I was left with no alternative but to resign" - Billy Walsh hits back at IABA claims
7 years ago
REVEALED: The salary paid to Ireland's most successful Olympic coach
7 years ago
IABA chairman: "Billy Walsh looked me in the eye and offered his hand"
7 years ago
Report: IABA reneged on Billy Walsh pay deal that was half United States offer
7 years ago
PICTURES: Billy Walsh will soon be walking in Memphis as US boxing coach after leaving Dublin Airport this morning
7 years ago
There might be another twist to Billy Walsh's resignation as Irish Sports Council put squeeze on IABA
Next Page