Sean Spicer’s eventful start to his role as White House press secretary continued on Wednesday, although for once, it wasn’t his fault that he was the centre of worldwide attention.

The New England Patriots were in the White House on Wednesday following their Superbowl victory earlier this year and one of their biggest stars appeared to get a little lost while having a look around.

While Sean Spicer was busy responding to a reporter during a press briefing, he was interrupted by the unmistakeable sight of Rob ‘Gronk’ Gronkowski, who popped his head around the corner.

This guy was either confused, terrified, or star-struck. 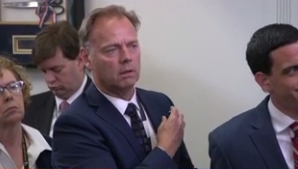 Spicer didn't have a clue what to do.

But Gronkowski was only there to inquire one, simple thing: “Sean, need some help?”

Given the way some of Spicer’s press briefings have gone of late, it’s no surprise that Gronk saw fit to offer some assistance and though his interruption was amusing, it had nothing on Melissa McCarthy’s vicious parody of the press secretary on Saturday Night Live at the weekend.