They got a draw out of it too.

Australia were denied a famous sevens victory over their fiercest rivals when New Zealand appeared to deploy eight men on the pitch for the crucial final play.

Ardie Savea broke through for a spectacular try in the last minute to tie the game 17-17 in the Sydney Sevens but World Rugby are under pressure to investigate that deciding play with footage showing that New Zealand had eight men on the pitch.

Fantastic stuff. But, at a closer look, you'll see too many men in black jerseys involved.

The first shot shows seven active Kiwis on the field of play and try-scorer Savea isn't in the picture yet. 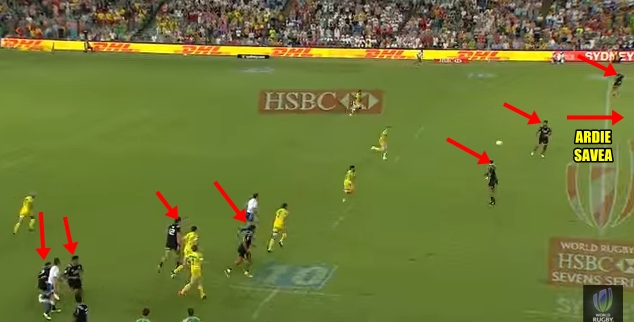 As the ball is shifted left to right, one New Zealand player jogs off to the sideline and Ardie Savea comes in for a crucial play.

The shots don't show the eight players together at one stage but the two on the far left come out of picture for the second photo and there are still six men in play.

Here is the crucial play that shows the eight players.


popular
In 86 seconds, Patrick Bamford becomes English football's voice of reason
'Make him hurt, make him yours' - How the Springboks ruled the world
Springboks legend Tendai Mtawawira tells us what he really thinks of Ellis Genge
Jose Mourinho is the picture of happiness and health after Spurs sacking
'Beast' Mtawawira is a big fan of Mike Ross' Lions front row
"We did find him hours later and we made up." - How Flynn and his best friend came to blows in Croke Park
Ugo Monye's revised Lions XV dominated by Welsh and Irish
You may also like
2 years ago
James Haskell recalls first ever encounter with 'best ever' Brian O'Driscoll
2 years ago
The blueprint to beating New Zealand sounds pretty simple in theory
3 years ago
All Blacks name team that would put the fear of God into anyone
4 years ago
All Blacks respond to bizarre hotel bugging charge involving former employee
4 years ago
Irish fans rage as Sam Cane escapes red card for tackle that left Robbie Henshaw prone
4 years ago
All Blacks rugby legend's commitment to Gaelic football would put many clubmen to shame
Next Page