It seems like everybody in Ireland watched Conor McGregor claim UFC gold in Las Vegas.

The Irish rugby team were early risers, on Sunday morning, as they sat down to cheer UFC superstar Conor McGregor on against Chad Mendes.

As World Cup preparations ramp up, Ireland coach Joe Schmidt was not a fan of a 5am live viewing but gave the thumbs up for his squad watching a recording of the UFC 189 bout at 7:30am, before training.

Among the anxious viewers were Ireland captain Paul O'Connell and prop Jack McGrath.

O'Connell said, 'I was up for it. I don't know a lot about UFC but I watched the fight. I though [McGregor's win] was pretty incredible.' 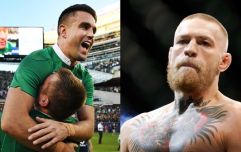 END_OF_DOCUMENT_TOKEN_TO_BE_REPLACED

'I think a few of the lads have jumped on the bandwagon alright,' joked McGrath.

'Fair play to McGregor. It was unbelievable. A serious comeback. Congratulations to him.'

Skip to 1:55 in the video [below] to hear more from both players, who were in Galway, today, launching Ireland's new, Canterbury-designed World Cup jerseys.


popular
Nigel Owens on most annoying players to referee (three of them are Irish)
Six All Blacks but no Ireland players in world's top 20 list headed by Antoine Dupont
"I asked one question and lads slagged the arse off me!" - Johnny Sexton on Roy Keane chat
Seamus Coleman gives brilliant post-match interview after Everton beat Arsenal
Tadhg Furlong gets some love as 2021 'Best XV' debate sparked
"My thoughts were with him initially and that's why I got emotional" - Mulcahy still the man for Kilmallock
"Women's rugby deserves better and he's not the man for the job"
You may also like
2 weeks ago
Conor McGregor pays tribute to Solskjaer after Man United dismissal
1 month ago
Conor McGregor posts emotional 5-minute voice message to Ian Garry after UFC debut win
1 month ago
"The Irish are back, baby!" - Ian Garry pays tribute to McGregor after UFC victory
1 month ago
José Mourinho swaps Conor McGregor a Roma jersey for some whiskey
2 months ago
Conor McGregor nearly hits Chicago Cubs fan with wild first pitch at Wrigley Field
4 months ago
What are the dark circles on swimmers backs at Tokyo Olympics?
Next Page