A few months ago, we brought you an article about the plight of poor Carl Griffiths who had to pump the brakes on his rugby career because he couldn't find boots that would fit his size 21 feet. 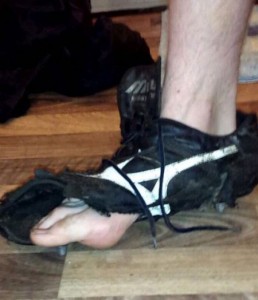 But the tough times are over for 6ft 8 in player after Wales captain Sam Warburton presented him with the appropriate footwear for his 14.5 inch long feet.

Adidas produced two pairs of Kakari boots for the 22-year-old who can now resume lining out for Trimsaran RFC.

Griffiths said: "It is amazing to be able to play the game I love again.

"I had no idea they were planning this and I had almost given up hope of ever finding boots that would fit me again."

popular
The SportsJOE 12 o'clock quiz | Day 143
Three teams Leinster can pit against each other to prepare for Munster
SportsJOE 2000s Football Quiz | Round 12
Rory McIlroy defends Dustin Johnson after Brooks Koepka comments
Collin Morikawa makes huge world rankings leap as Lowry drops back
Only a Champions League fanatic would get full marks in this quiz
The SportsJOE 12 o'clock quiz | Day 142
You may also like
2 years ago
Ian Madigan brilliantly shuts down Twitter user who was complaining about female referees
2 years ago
Sean O'Brien plays very funny prank on shop assistant in Kilkenny
2 years ago
Home and Away's Alf Stewart sends brilliant response to Cork City's league win
2 years ago
Sean O'Brien not impressed with Kearney brothers being referred to as 'famous farm boys'
2 years ago
WATCH: Andy Gray, bless him, got himself a bit muddled while talking about Tony Blair
2 years ago
Limerick manager receives best excuse to miss training we've seen in a long time
Next Page