Ireland to ring a couple of key changes for Italy

The majority of Ireland's players that stumbled on the opening day of the Six Nations will be afforded the chance to redeem themselves against Italy.

Joe Schmidt may have planned a few personnel changes for Saturday's visit to Rome but that looks to have gone out the window after last week's 27-22 loss to Scotland.

The Kiwi names his starting XV to face Italy on Thursday afternoon [1pm] and there are only a couple of expected changes. Andrew Trimble should come back onto the right wing in place of Keith Earls while Munster lock Donnacha Ryan is expected to start alongside Devin Toner, with Iain Henderson dropping to the bench.

END_OF_DOCUMENT_TOKEN_TO_BE_REPLACED

The Trimble/Earls call is not made yet. The Ulster winger was said to have proved himself more than ready in Tuesday's training run but he will have to prove his full fitness at the Thursday morning hit-out at Carton House before getting that 14 jersey. 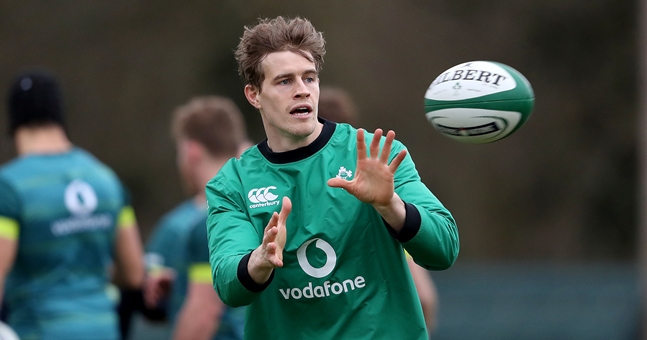 The other 13 men that started at Murrayfield should retain their spots, with Paddy Jackson and Garry Ringrose two of the under-pressure players happy for the show of faith. Despite suggesting he was in line to train on Tuesday, Johnny Sexton will sensibly to left out of the squad.

There had been calls for CJ Stander to get a run at No.8 in place of Jamie Heaslip but Schmidt will give his first-choice back row another Test match to gel. Josh van der Flier will be in reserve as Peter O'Mahony is not being risked.

With Tadhg Furlong set to train on Thursday morning, the front row will remain the same. The Robbie Henshaw-Ringrose partnership will get its second international outing while Simon Zebo will start again on the left wing.


popular
Shane Lowry had no problem setting reporters straight at Ryder Cup briefing
Rob Kearney taught a classic GAA lesson when he tried to have the craic in second game back
The scenes in Newbridge as the biggest hit and hope ever knocks Moorefield out
When Liam Brady lit into Brian Clough for his dismissive Mick McCarthy comments
Kieran McGeary on his relationship with Mickey Harte and his role in Tyrone's success this year
How one text message a teammate sent Kieran McGeary proves that Tyrone's success was a team effort
"I just knew that Karen was going to be there with us... I absolutely adored her" - Maeve Kelly