After 108 Tests for Ireland, Paul O'Connell appears to have reached the end of the road.

The television pictures looked back, yesterday. The news is bad today.

Peter O'Mahony is out of the World Cup and O'Connell is not far behind.

END_OF_DOCUMENT_TOKEN_TO_BE_REPLACED

Ireland beat France 24-9 in Cardiff to march on, unbeaten, in the tournament. They will have to continue on without their captain and back row talisman.

Team manager Mick Kearney confirmed, this morning, that O'Connell sustained a "significant hamstring injury" and has been hospitalised. He is awaiting further scans today but management are not optimistic.

It is suspected that the lock has torn his hamstring off the bone and will now face an extended spell on the sidelines.

Given that O'Connell was going to retire from Irish international duty after the World Cup, his 40-minute outing at the Millennium Stadium is almost certainly the last time we see him in a green jersey.

However, Rob Kearney revealed that O'Connell did make it into the victorious Irish dressing room after the final whistle. Kearney commented:

Paul was beaming from ear to ear at the end, it's small moments at the end that make changing rooms pretty special. 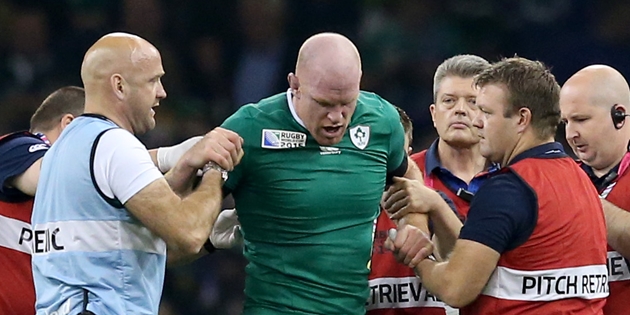 END_OF_DOCUMENT_TOKEN_TO_BE_REPLACED

The update, according to Kearney, is a 'little more encouraging'. The out-half has a groin strain and it is, at present, "unclear" if he will feature in Sunday's quarter final against Argentina.

It is unclear whether O'Connell will choose to battle back from his latest injury set-back in order to line out for Toulon, his new club.

It took Cian Healy just under four months to get back from a similar injury [upper hamstring tear] last season.

Each injury is different but that could potentially rule the 35-year-old out until late January at the earliest - meaning he would miss Toulon's Champions Cup meetings with Leinster.

O'Connell has a one-year contract with Toulon, with the option of a second, so this could be it for the Limerick legend.


popular
Sub goalie saves last-minute Diarmuid O'Connor penalty as Knockmore march on
Billy Burns has night to forget as Connacht blow Ulster away
Where Ireland's highest earners sit in relation to rugby's top-paid players
French star outrageously lucky to avoid red card for dangerous Antoine Dupont tackle
Last-gasp winner by Fionn McDonagh sees Westport edge out Ballina in Mayo thriller
Player voices fall on deaf ears as Congress reject GAA championship restructure
Five surgeries by 26 and getting injured by a melon in training
You may also like
4 days ago
"Where Johnny Sexton is so important to us now is being able to pass the baton"
4 days ago
"I'd love to finish on home soil but I can't see it. I won't be playing in the next Six Nations"
5 days ago
Ireland star Will Connors on his rude awakening playing GAA in KIldare
6 days ago
Andy Farrell's Ireland squad for November internationals to feature some exciting talents
6 days ago
Picking Ireland's best back row as multiple candidates hit early form
1 week ago
Caoimhín Kelleher could carve out a career at Liverpool
Next Page