On this date, Ireland will face England at the Aviva Stadium in what will be the final game of the 2017 Six Nations.

As if facing the old enemy wasn't a big enough deal in and of itself - there are going to be so many subplots involved in this game.

END_OF_DOCUMENT_TOKEN_TO_BE_REPLACED

Not to mention that game has the potential to be an all-you-can-take, Grand Slam decider.

We also feel that the English have been getting a little a bit ahead of themselves with all this talk about them being the team to finally knock New Zealand from their perch atop world rugby.

There are a few fixtures before the All-Blacks game, remember https://t.co/aFts74bsxD

All of this, in addition to the incredible form and performances displayed by both teams this year, leads us to believe that this will be one of the most anticipated fixtures of 2017.

END_OF_DOCUMENT_TOKEN_TO_BE_REPLACED

Jones was speaking to Sky Sports today in a lengthy interview segment during which various topics were discussed, from England's unbeaten year to Jones' relationship with the Australian media.

Naturally, the subject of next season's Six Nations reared its head and when Jones was asked what side has made the most progress since the most recent tournament, the England coach had this to say:

“I think most definitely France and Ireland, Ireland been impressive, they’ve obviously had their world breaking breaking win against the All Blacks, they're very well coached by Joe Schmidt and they have produced some young players."

No doubt Jones would have been impressed with Ireland's performances throughout the November series which saw Schmidt mastermind victories over New Zealand and Australia.

We also like the fact that he is aware of the emergence of young talent that has taken place in Schmidt's squad, with the likes of Tadhg Furlong, Joey Carbery, Josh van der Flier and Paddy Jackson all playing pivotal roles in a successful November. 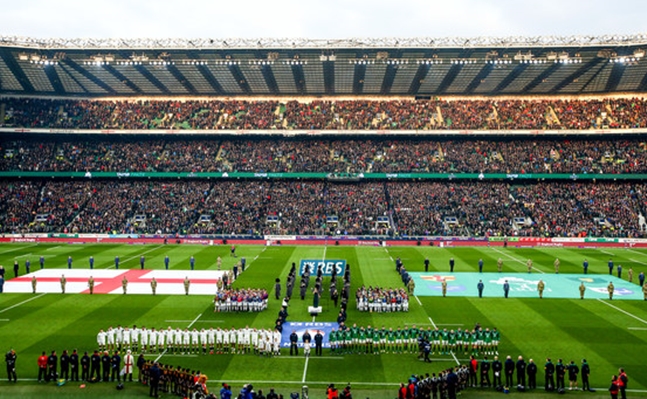 It goes without saying that we don't want to be getting ahead of ourselves as, although we have France and England at home, Ireland will have to travel to Edinburgh, Rome and Cardiff during next year's tournament - no easy task.

Nevertheless, regardless of the outcome of the preceding fixtures, slam or no slam, the match against England is going to be HUGE.

And it's only three short months away.


popular
Éamonn Fitzmaurice explains Aidan O'Shea's best position and how it can be used against Kerry
Matt Le Tissier says he asked Sky Sports why they never sacked Jamie Carragher
Patrick Vieira claims he was 'much better' than Roy Keane in new interview
Ex-Real Madrid defender reveals he used to turn up to training drunk
Two All-Ireland quarter-finals to be streamed exclusively live on NOW
QUIZ: How many of the 10 most successful football counties can you name without making a mistake?
Conor McGregor and Floyd Mayweather 'in talks' about a rematch
You may also like
1 week ago
"Hopefully we'll come away with a gem" - Joe McCarthy potential sealed Ireland selection
1 week ago
Andy Farrell had an interesting take on Irish provinces being outmuscled in big games
1 week ago
Nathan Collins stuns Ukraine with goal sweeter than Michael Obafemi's
1 week ago
"I got sent the clip!" - Mack Hansen wasn't letting Greg O'Shea forget his Ireland comments
1 week ago
Ireland team Andy Farrell should start in First Test against the All Blacks
1 week ago
Five new faces in 40-man Ireland squad to tour New Zealand
Next Page