Drew Mitchell: from flirting with Leinster to Côte d’Azur living with Toulon

It all comes down to 80 minutes

Instead of Côte d’Azur swims with Leigh Halfpenny and Matt Giteau, former Wallaby Drew Mitchell could have been sipping lattes in Dublin 4 with the likes of Rob Kearney and Ian Madigan as Leinster were the only other club the Rugby Club Toulonnais wing seriously considered before making the move from Down Under in 2013.

While still playing for New South Wales Waratahs, Mitchell had discussions with the province that are Toulon’s Champions Cup semi-final opponents,

“I guess it came down to pretty much Toulon and Leinster at the time. They were the two I gave the most serious consideration to and towards the back end, they were the only two I was speaking to.”

Mitchell went so far as meeting with Leinster officials during the Wallabies 2012 European tour,

“At the time I was speaking to them, the Wallabies were not playing Ireland on their tour that year. So, I met some of their officials in Wales and we sat down and spoke about things.”

Alas, Mitchell opted for the Stade Felix Mayol over the RDS.

Part of this decision came down to how fellow Toulon Aussie Giteau is more than just a teammate from their Wallaby days and time together at Western Force,

“I was the best man at he and his wife Bianca’s wedding and I am godfather to his elder son, so I guess it is kind of unique to be able to go half way around the world to a different country and to a different team and a different culture but still have someone so close in the same environment. That is one of the bigger reasons why I ended up here as opposed to Leinster.”

The 31 year-old gives an honest account into some of the personal reasons that factor towards choosing a rugby destination,

“To go to a completely different culture and to be so far isolated, I don’t have a partner or a family, so it has been a tremendous help for me having Matt and his family here who are so close.” 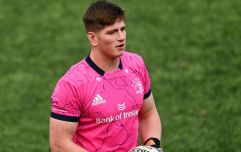 END_OF_DOCUMENT_TOKEN_TO_BE_REPLACED

For some the mention of a player opting for Toulon over any other club comes with the image of flashing euro signs such has been comic book tycoon Mourad Boudjellal's pursuit of some of world rugby’s biggest names.

Mitchell again shows an open nature when asked if he is frustrated by talk of a nouveau riche Toulon backed by a rugby “sugar daddy”,

“It can get to you at some point because some of it can be somewhat disrespectful in the sense that they feel that any success that we have had has been because it is just a gathering of good players, a gathering purely through financial decisions. I think it devalues the amount of work we do.

“We train just as hard and just as much but it is just sometimes the names on our team sheet may be a bit more recognisable than some of teams we play against.”

And what about Leinster captain Jamie Heaslip dubbing Toulon “the Real Madrid of Rugby”?

“That is something that is thrown around a fair bit. I think it is kudos to recruitment at our club that they get players from all around the world that are hugely respected.”

A similarity Mitchell shares with Heaslip is a desire to work hard, play rugby hard but to escape the game during down time,

“I am the sort of person, that as soon as I leave training I forget about it and try not think about it again until I am back at training.” 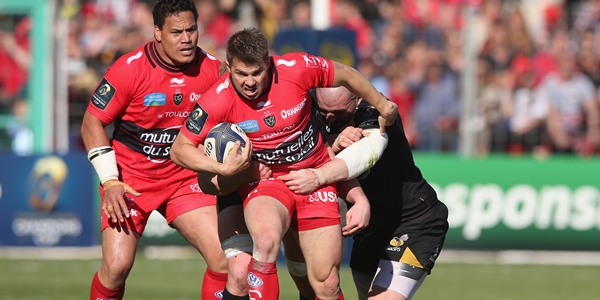 Irish rugby fans may already be familiar with Mitchell’s larger than life social media presence and it is with a chuckle he says,

“Some people might think I am a little bit crazy, particularly some of the French guys here who may be a little bit more conservative.

“When I had a week off last month, I skied down a mountain in a pair of swimmers across a makeshift pool it is probably not the thing to be doing in your week off! I guess there is calculated risk, a mate of mine did it an hour before and dislocated his shoulder but I still wanted to do it myself and capture it on video!”

From the focused professional athlete to the zany prankster, Mitchell is comfortable showing different aspects to his character and he reveals yet another: the tech start-up entrepreneur.

As Mitchell talks of his role with Sporple, think LinkedIn for athletes at all levels from amateur to aspiring professionals to allow them connect agents and clubs, he sounds as if he would be just as comfortable speaking at Web Summit as about backline moves.

Despite making these post retirement plans, the wing feels that Toulon is the furthest place from being a retirement home for rugby stars in the twilight of their professional careers,

“Some people say that players come to retire but I think it is more so the other way. When people come here, they are in a changing room filled with people that they have admired and respected for a long time.

“You get this sort of re-energized feeling where you want to out and you want to prove yourself to your teammates. You go out there and you don’t want to let the likes of your Bakkies Bothas, your Juan Smiths, your Ali Williams and your Matt Giteaus down because you respected them for so many years as opponents. You want to make sure you gain their respect and that you don’t let them down.”

Fighting words that encapsulate the challenge that faces Leinster in Marseille’s Stade Vélodrome.


popular
QUIZ: How many of the 10 most successful football counties can you name without making a mistake?
Conor McGregor and Floyd Mayweather 'in talks' about a rematch
Éamonn Fitzmaurice explains Aidan O'Shea's best position and how it can be used against Kerry
Matt Le Tissier says he asked Sky Sports why they never sacked Jamie Carragher
Patrick Vieira claims he was 'much better' than Roy Keane in new interview
Steve McClaren issues warning to Man United players
Two All-Ireland quarter-finals to be streamed exclusively live on NOW
You may also like
3 weeks ago
Attention turns to Leinster's next attack coach as Sean O'Brien gets coaching gig
3 weeks ago
"That's what he does" - Wayne Barnes and the crucial calls that cost Leinster
3 weeks ago
"If there was a Lions team being picked now, Josh would be a starter"
3 weeks ago
"They made us dream" - Incredible scenes as Ronan O'Gara and players welcomed back in La Rochelle
3 weeks ago
Another gold star opportunity ripped out of Leinster's hands
3 weeks ago
"They could see, 'Now I know what this crazy Irishman is about'!" - Ronan O'Gara
Next Page