If it wasn't for referee Pascal Gauzere, Ireland's scrum dominance against Italy on Saturday could have been far more pronounced, and far more profitable.

Granted, they were up against a mediocre scrum, but the improvements made by Greg Feek since November were marked and clear.

In the November tests and the back-to-back games with Quins in December, Mike Ross struggled, being taken advantage of by powerful loose-heads like Tendai Mtawarira and Joe Marler, as he took chances with his binds and drove far too aggressively. 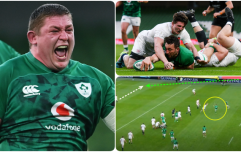 Ireland's players talk us through their greatest try in five years

END_OF_DOCUMENT_TOKEN_TO_BE_REPLACED

However against Italy on Saturday, his display at the set-piece was far more patient, and he was all the better for it.

As pointed out in our pre-game assessment of the Italy scrum, Matias Aguero is often most frustrated when his opponent scrums straight and legal, and this was exactly whet Ross did, letting Aguero's poor binding and aggressive drives act against him.

The opening scrum of the day was a perfect example, as Ross stayed patient before winning an Irish penalty.

As we can see above, Ross has a solid set of angles, while he's also getting a much more powerful drive from his back row, with Jordi Murphy pushing straight through the scrum, while Sergio Parisse comes in from a height.

However, the important thing to look at here is Aguero's bind, which is far too low, resulting in a pointed elbow, which makes a collapsed scrum far easier, and that's exactly what happens as you can see below. 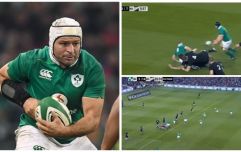 END_OF_DOCUMENT_TOKEN_TO_BE_REPLACED

It owed a lot to Aguero's poor bind.

The photo below gives a second look at where he bound on Ross for that scrum (circled), while the yellow cross indicates the ideal position for his grip.

By having such a short bind, Aguero is more naturally inclined to pull downwards, lending itself to a collapse.

Compare this to the position of Jack McGrath's bind later in the match.

Much higher, and as a result, less likely to result in a collapse. 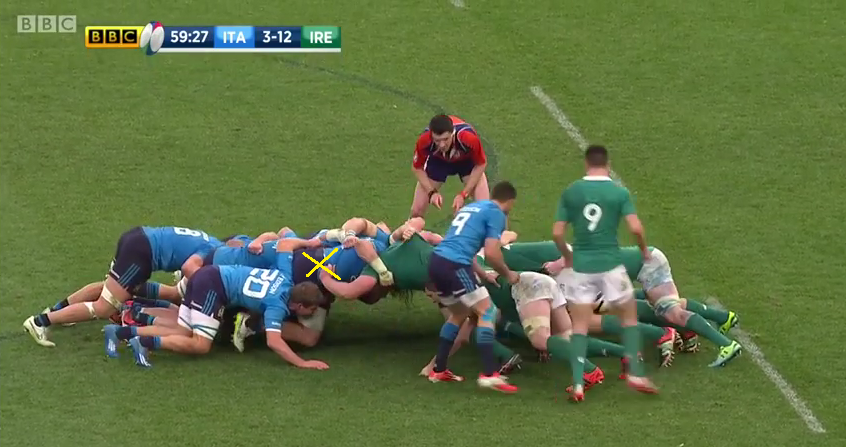 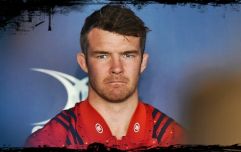 Peter O'Mahony's Ulster performance should be hung in a rugby museum

END_OF_DOCUMENT_TOKEN_TO_BE_REPLACED

Ross had Aguero's number from the very first scrum and, were it not for Gauzere's poor officiating, Ireland should have been rewarded with another penalty for the second scrum of the day.

Initially, Ross, again, has set up with a perfect body position; back parallel to the ground, and legs bent, while Aguero's bind has once again dropped, as we can see below.

Agureo then proceeds to drive in and under Ross at an angle, boring in, causing the scrum to collapse. Bizarrely, despite being on that side of the scrum, Gauzere instead opts to reset the scrum, leaving Aguero very lucky indeed.

On the reset, again Ross is comfortable against Aguero, as his body angles show. The important thing to look at in this instance though are Aguero's legs, which are locked out fully, showing just how much effort he's needing to exert to keep the Italian scrum from going backwards.

Ireland concede a penalty on the next scrum, on 11 minutes, and while all of the focus had been on Ross and Aguero so far, it's Jack McGrath and Castrogiovanni who are under the spotlight this time.

Ultimately, the lack of replays offered by the Italian TV director dictates that our analysis is limited on this one, but we have made one observation that indicated McGrath was hard done by.

In the picture below, you can see circled the heavily bandaged right hand of Martin Castrogiovanni, who has dropped his bind completely, and is holding himself up.

Despite this though, Gauzere is clearly influenced by the appeals of scrum-half Edoardo Gori, and when the scrum eventually collapses, the French referee simply resorts to guesswork.

As for the identity of the bandaged right hand propping up the scrum, well... 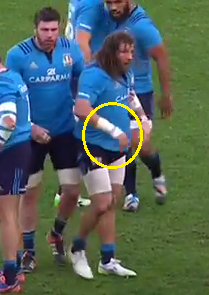 Aguero really has a go at Ross next time around, but he simply wasn't for budging.

In the example below, Aguero has dropped incredibly low, but because of Ross's strong base and good positioning, the Italian can't do any damage.

A questionable early engagement went against Ross later in the half (both he and Aguero were driving), but 10 minutes later he picked up another penalty off Aguero, after the Italian folded the scrum yet again.

As you can see in the photo below, Aguero's bind was once again the culprit. 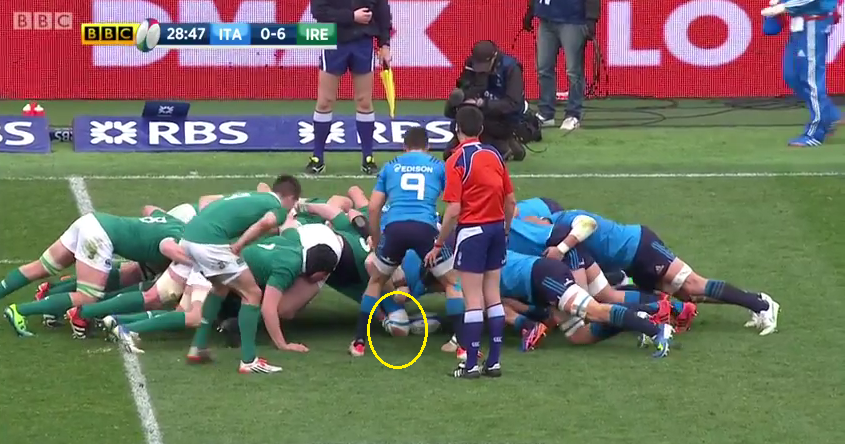 Before this scrum, the Italian TV director gave us a rare chance to see what things were like on the McGrath/Castrogiovanni side of the set piece, and while it was just a brief shot, it told us a lot about the Italian prop's illegal binding.

In the photo below, just as Gauzere calls "bind" you can see the position of Castrogiovanni's grip. Long, on the body, and most importantly, legal. 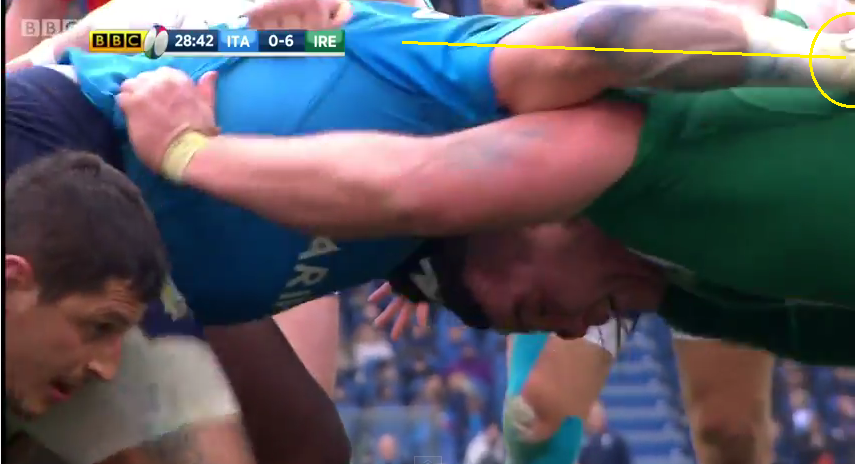 But just one second later, when the packs engage, Castro switches his bind completely, moving it into an illegal position around McGrath's tricep. This is a feature of Castrogiovanni's scrummaging we'll see plenty of throughout the second half. 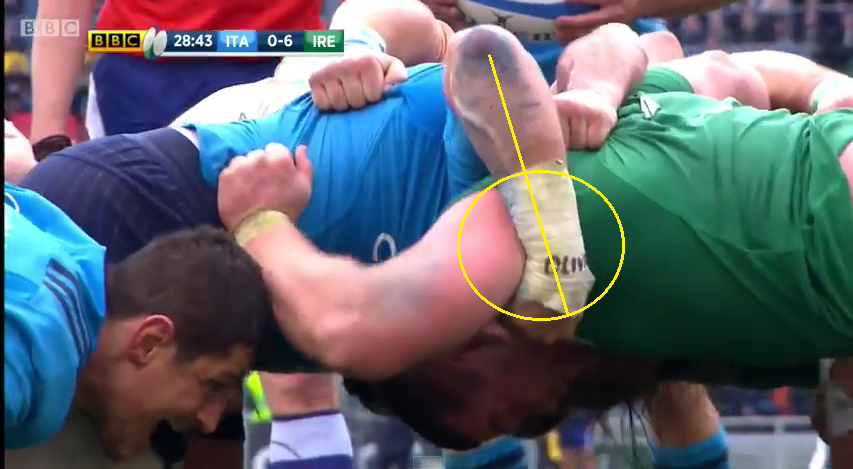 At the start of the second half, we see yet another excellent eight-man shove from the Irish.

In this scrum, Martin Castrogiovanni initially gets a nudge on Jack McGrath, but after the Italian backrow all lift their heads from the scrum, the Irish pack gain some hard yards, with the full scrum driving, heads down. 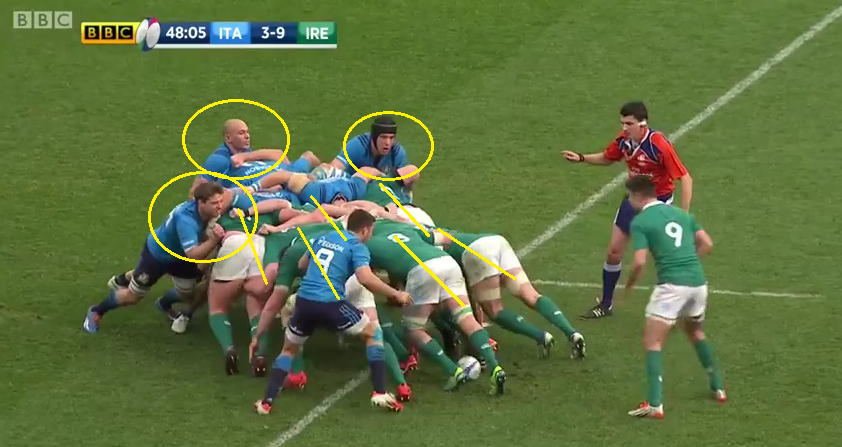 On the next scrum, McGrath is penalised for collapsing the scrum, and while it's impossible to determine who caused the collapse (the camera changed angle, and we didn't get a replay), Ireland were unfortunate not to pick up penalties for two infringements from Castrogiovanni before the scrum went down.

First off, the bind from Castrogiovanni (as we saw earlier), switches to an illegal position once the scrum is set.

Here is the initial bind... 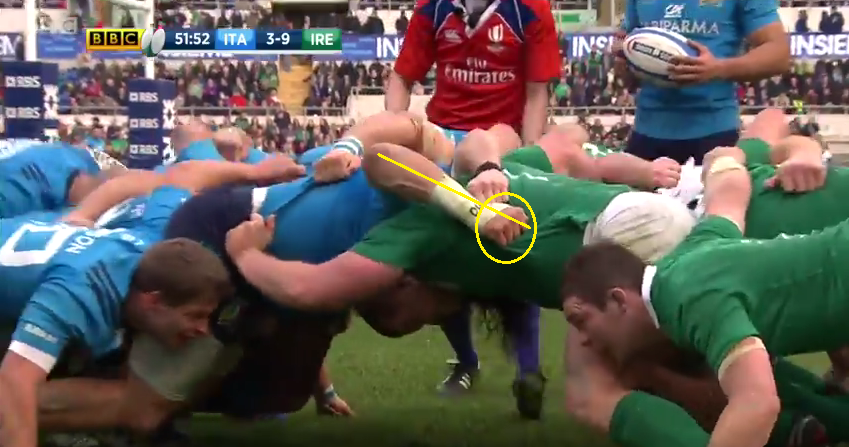 Before he shifts it onto McGrath's arm, and the first infringement. 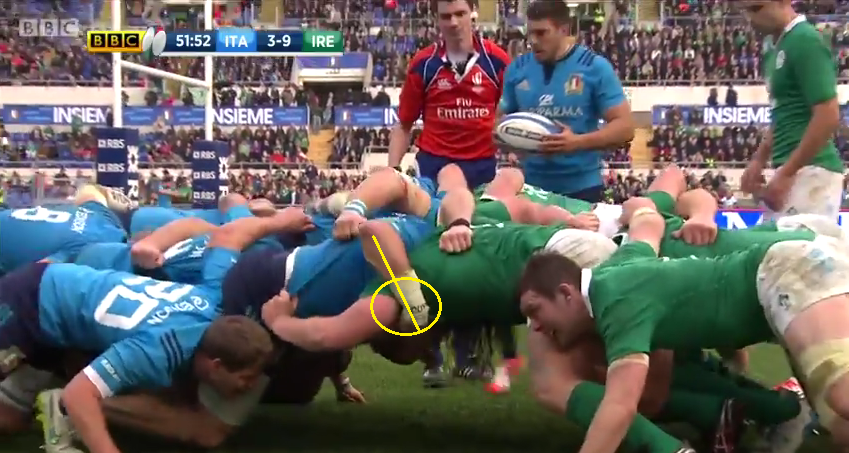 His second infringement comes once the ball is fed, as he drops to his knees after McGrath gets the squeeze on, as you can see below. Despite this, McGrath is penalised when the scrum eventually collapses, although the blame for this can be squarely laid on touch judge Wayne Barnes who called the penalty, which isn't particularly reassuring, considering the Englishman takes charge of this weekend's meeting with France. 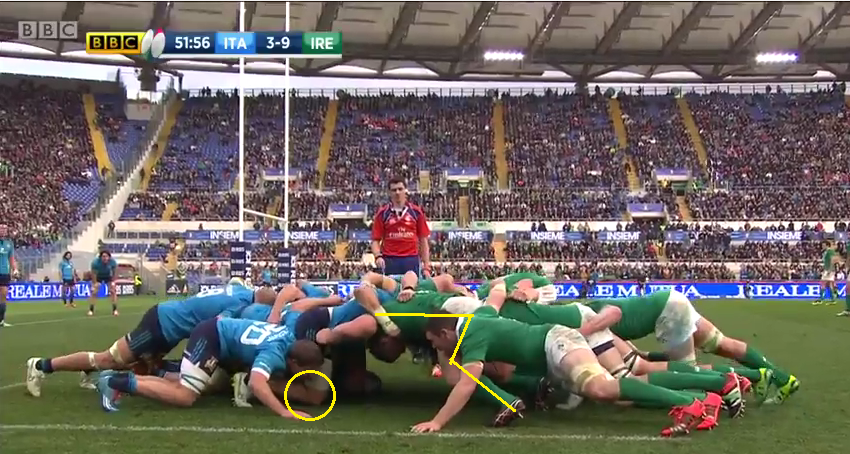 Ireland do win a penalty at the next scrum however, and while it's difficult to see, we'll give Gauzere the benefit of the doubt.

Alberto de Marchi is the man who is penalised for his crooked drive on Marty Moore, and we can just about pick it out.

In this photo of the early scrum, we can see Marty Moore, numbered 18, seems to be facing crooked, compared to his front row partners. 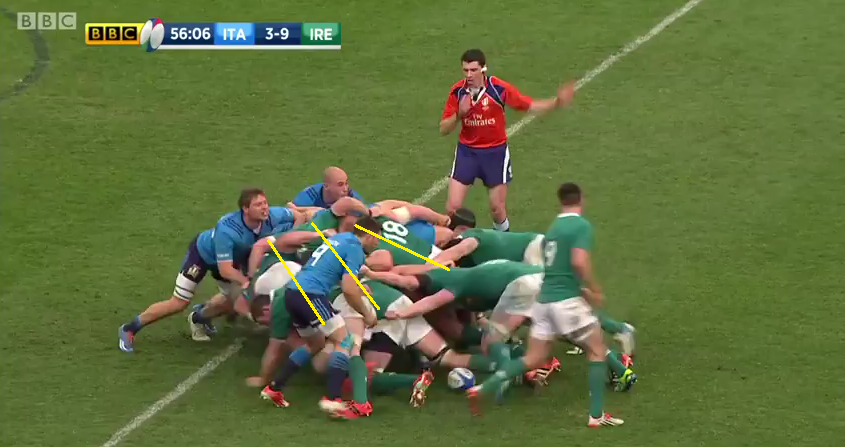 And when the scrum collapses, we can see why. De Marchi is clearly boring across Moore, a pretty brainless action when the referee is right by your side. 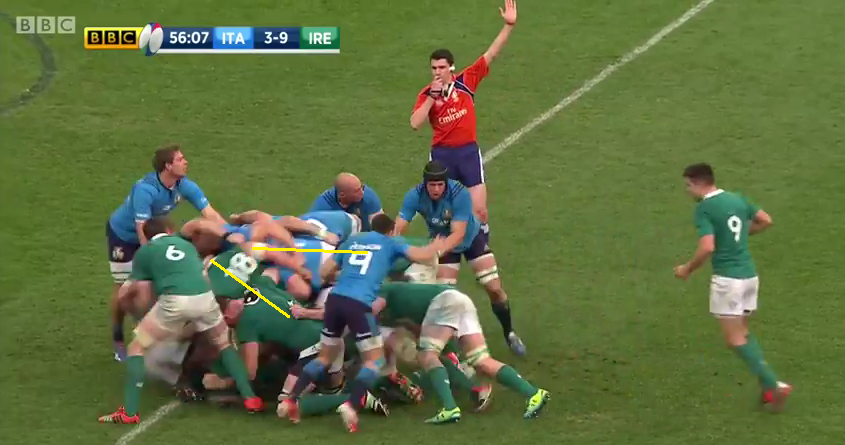 With the changes rung and the game wrapped up, the Irish front row get a roasting in this scrum, 10 minutes from time.

The blame for this penalty seems to lay at the door of James Cronin, who doesn't get his backside tight enough to Devin Toner in the second row, and as a result he gets turned in dramatically (and legally) by Italy's Dario Chistolini. It's also worth not that the Italians are a man down in this scrum after Manici's sin-binning, but are driving in unison, compared to Cronin and Toner, who are shoving in different directions. 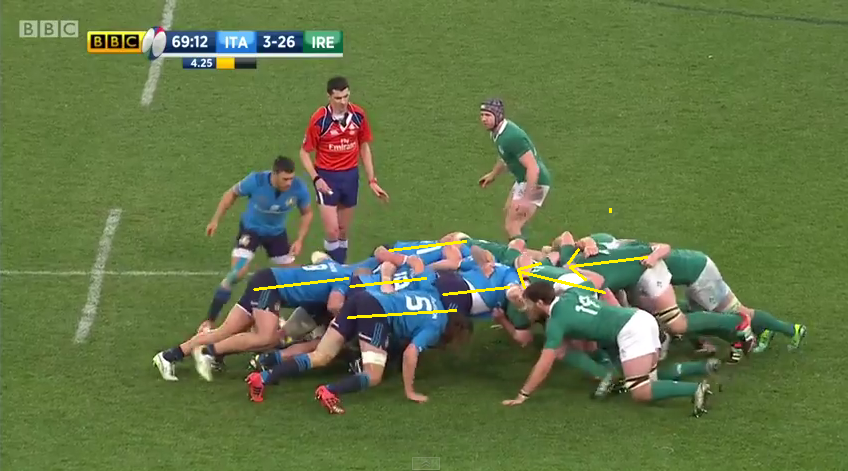 However, Cronin really gets the squeeze on Chistolini at the next scrum, and it's yet another clear penalty missed by Gauzere.

Cronin gets the initial shove on Chistolini, and is able to turn his opponent, who resorts to locking his legs to stop himself going backwards. 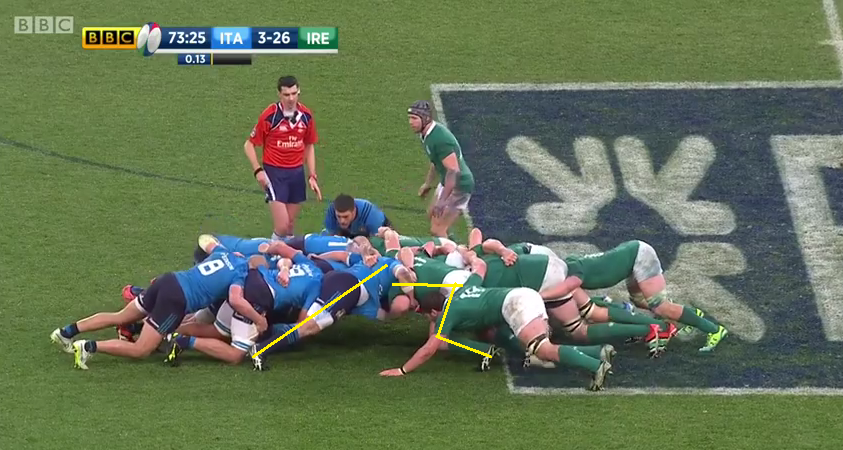 With Chistolini turned, Cronin drives on some more, which gives his opponent two options; go backwards, or pop up.

Chistolini opts to stand up out of the scrum, and despite the referee failing to spot it, this drive by Cronin is the perfect example of how to legally force your opponent to pop up, rather than simply driving upwards, which we see way too much in the modern game. 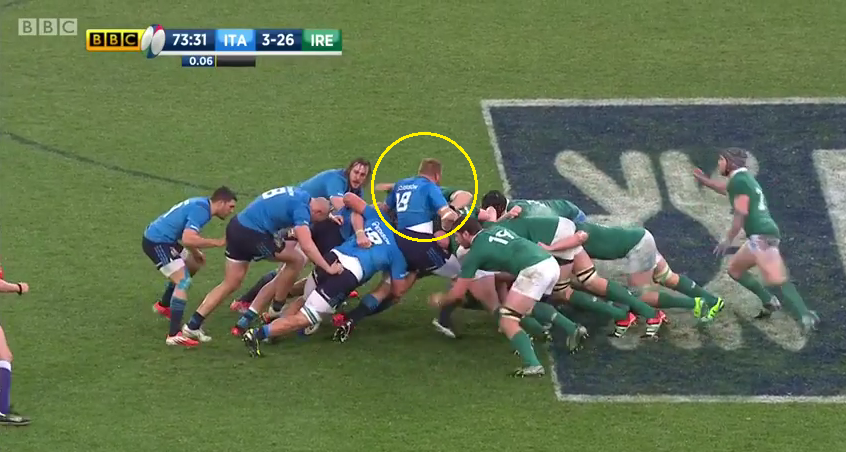 There was quite a good battle between Cronin and Chistolini in those final minutes. Yet, it was Cronin who was unlucky not to concede a penalty a few minutes later, as he got twisted inside by the tight-head, but with Italy already recovering the ball from their own put in, Gauzere didn't feel it warranted a penalty. 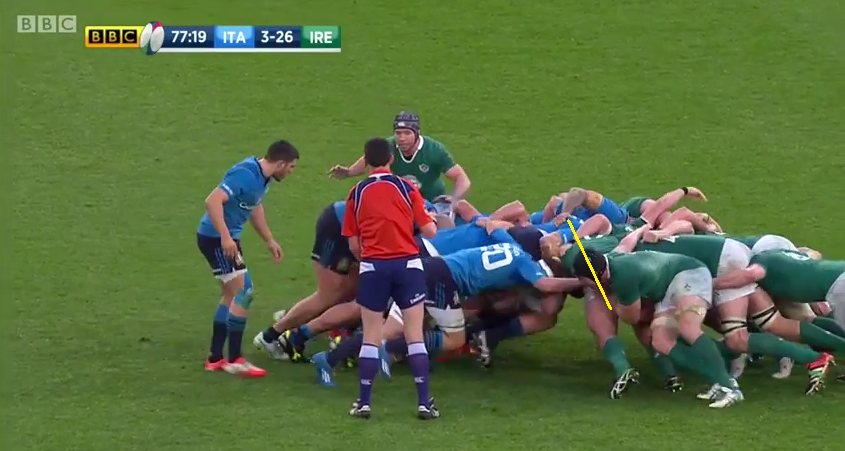 It got messy in the final 15 minutes after the benches were emptied, but for the most part it was Ireland's best scrummaging displays since John Plumtree's departure.

Ross gave one of his best Irish performances for some time, and has surely kept his place for this Saturday's visit of France.

On another day, McGrath could have won two penalties instead of giving away two, and he'll be pleased with his overall performance, but the Irish scrum will only improve with the return of the destructive Cian Healy to the set-piece.

The Irish scrum has become a weapon again.


popular
Six GAA games shown on TV this weekend that you do not want to miss
Andy Moran reveals which former Mayo teammate was the ultimate team player
Paul Galvin is not one bit impressed with the new Kerry jersey
"It’s hard not to respect Johnny, even if you don’t like him!" - Dan Biggar
QUIZ: Which is the correct GAA crest?
"I was in the Blackrock end goal looking up to the heavens saying, "Get us through it" - Kerins following his late father's footsteps
Craig Dias on club All-Ireland run, winning Leinster, and making his second debut for Dublin a decade after his first
You may also like
3 years ago
How Ireland treated David Pocock in Melbourne was eye-opening
3 years ago
Johnny Sexton call moments before Andrew Conway's try was pure leadership
3 years ago
ANALYSIS: First look at the Conor Murray-Joey Carbery halves pairing
3 years ago
ANALYSIS: Preposterous David Pocock performance was a living nightmare for Ireland
3 years ago
ANALYSIS: Munster's leaders 'went missing' only because they were cleverly targeted
3 years ago
Three moments in first four minutes proved Ireland were always going to beat England
Next Page