WATCH: Nate Diaz was a guest on Conan last night and guess who crashed his appearance

We're used to seeing 'The Notorious' rule the roost during media tours leading up to big pay-per-view events but it was his upcoming opponent who appeared alongside Conan O'Brien on Tuesday night.

Diaz was enjoying a solid appearance when the show's host sprung a video message from a certain Irishman on him.

And it's safe to say that McGregor added to his litany of memorable quotes as he took the mick out of Diaz's choice of attire.

"I just hope he's not up on that stage wearing that stupid black t-shirt he's never out of," McGregor said. 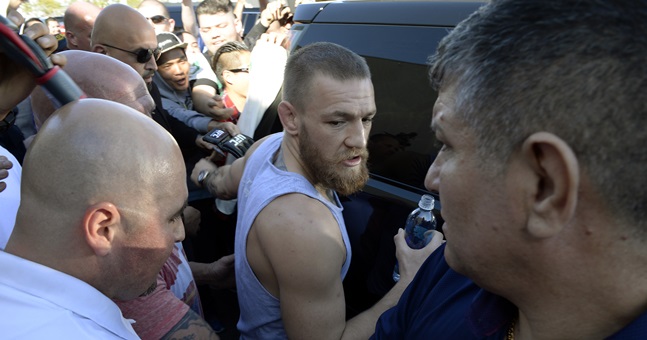 END_OF_DOCUMENT_TOKEN_TO_BE_REPLACED

"The boy's been wearing that same damn t-shirt for the last 20 years or something.

"The boy won the lotto the last time. He knows it, I know it. Well, August 20 I get my revenge and I look forward to it."


popular
Kilmacud Crokes to counter Glen's objection over extra players in All-Ireland final
"He's a serious specimen, 6 ft 3 as well, so he's an incredible athlete" - Geaney hails O'Connor's impact
January transfer window 2023: Follow the latest updates live in our hub
"He didn't give me that jersey back!" - Johnny Sexton on new rival Jack Crowley
Roy Keane's threat to Cesc Fabregas about 'pizza incident' has panel in stitches
The two toughest calls in Ireland team to face Wales are in the backline
Laura Woods savages Twitter user after he asks her to come over while his wife is at work
You may also like
1 month ago
Ariel Helwani shares Paddy Pimblett WhatsApp messages as spat becomes public
1 month ago
Conor McGregor savagely hits back at Joe Rogan following PED comments
2 months ago
"There’s a new Irish superstar in town" - Young Derry fighter touted for UFC after big title win
2 months ago
Conor McGregor almost unrecognisable after shaving off iconic beard
3 months ago
Dana White confirms Conor McGregor is not in the USADA testing pool
4 months ago
Hasbulla signs five year deal with UFC 'worth more than many fighters'
Next Page